Canals have been a favourite hunting ground during the Hub Marketing Board's most recent activities and, on the premise of 'if it isn't broke don't fix it', we are more than happy to retain the waterways theme for our end-of-April extravaganza. An interesting offshoot of the Walsall Canal requires closer investigation, plus (whisper it quietly) we're even hoping to sample a pub or two along the way... 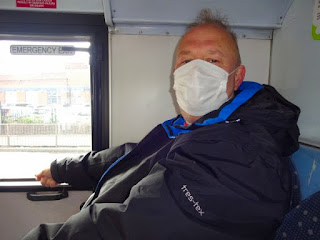 - Mr D9 drives to Darlaston -
Friday 30th April 2021 and yes it's true, board members are plotting to pick up some pints for the first time since our Stafford spectacular last October. An ahead-of-schedule Bradley Lane rendezvous punctures any prospect of a cob penalty as the surprisingly punctual Chairman delivers a D9 driving dosage aboard the number 79 bus. Our initial destination is Darlaston, alighting opposite the Asda in order to grab pictures of the Conservative Club on Little Cross Street, tucked away behind a set of underwhelming backstreet garages. 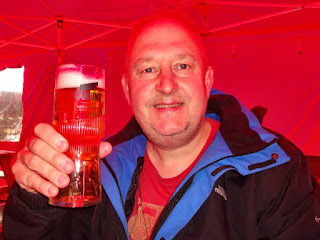 - A riot of red at the Why Not -
Our first drink of the lockdown-easing era however comes at the Why Not just off Blockall. Branded as a Davenports establishment, this has variously been known as the Talk of the Town and the St Lawrence Tavern over the course of its existence, and a red car park tent offers a distinctive setting for sampling some Carling or Worthingtons. The bright scarlet  backdrop might play havoc with the Secretary's intended photos but Mr WME does have the not inconsiderable solace of securing a £5 round, easily the Discount of the Day. 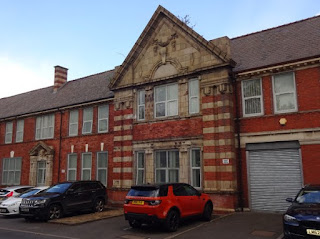 - Rubery Owen Office Buildings -
Supping up, there is local history on our collective radar as we swoop upon a target we somehow contrived to avoid during December's Darlaston ruminations. Even though we specifically featured Rubery Owen on our pre-Christmas tour, we neglected to visit the firm's historic Booth Street head offices - how remiss of us! The building still stands and is currently home to the 'Innovation Works', seeking to inspire the next generation of local businesses. Queen Street and Willenhall Road then combine to take us to The Crescent where the Robin Hood has an impressive lawn and (even better!) a glorious glass of Stout Dwarf. 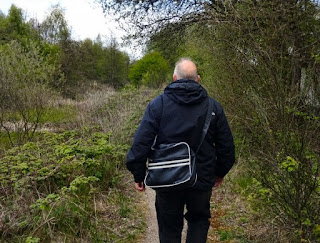 - The bald spot hunts the Anson Branch -
That Fownes elixir at the Robin Hood was the perfect prelude to the day's canal centrepiece, whereby Bughole Bridge begins our towpath trail on this occasion. The Walsall Canal is quite grim through here despite the presence of NHS-thanking street art and 'Jesus Loves You' declarations. We liven things up by selecting our silly songs - Shag Conners and the Carrot Crunchers meets a Margaret Thatcher impressionist - before Forster's Bridge acts as the gateway to the Anson Branch, a lost line of the BCN that was abandoned in 1961. 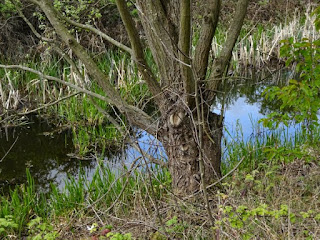 - Canal Clues near Bentley Mill Way -
The Anson used to provide a water supply to Birchills Power Station and had a junction with the defunct Bentley Canal; the Secretary has previous as regards exploring the route and it seems even more desolate and reed-choked than he remembers. The Chairman meanwhile is stunned to bump into one of his former neighbours, a chap called 'Mad Matthews' who is out walking his dog - he certainly seems to be quite a character! One extended chinwag later, we proceed to Bentley Mill Way before availing ourselves of a short 529 hop so as to avoid the worst of the Junction 10 bridge replacement works. 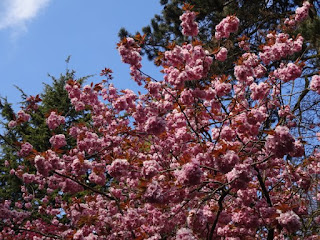 - Reedswood Park Blossoms -
Pargeter Street is our prompt to leave the bus behind and plot a path through Reedswood, passing the little tent hire shop on the corner with Edward Street in the process. It's nearing home time at the local Primary Academy school so we dodge the parked-up parents by seeking further refreshment at the Alma. We could get used to this beer garden lark you know, especially with the sun beaming down and PopMaster on the BBC Sounds app; we score very respectably this time around (even getting the Boyzone 3 in 10). Our 'prize' is a peek into Reedswood Park, admiring the springtime blossoms looking out over Bentley Lane. 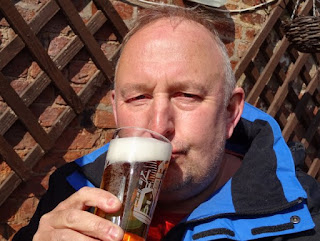 - Carling Concentration in Birchills -
Birchills now awaits but neither the Four Ways (converted into a Premier convenience store) nor the Rose & Crown (presumably still closed due to Covid) can claim our custom today. We pitch up instead at the New Navigation, not exactly the prettiest of places despite its canalside location. The outhouse vibe on the back yard has the properly pubby atmosphere we've so craved during lockdown, particularly with whiffs of coal smoke and boat grease on the breeze. A Carling each is adequate refreshment as the Chairman reminisces about classic Hub dives. 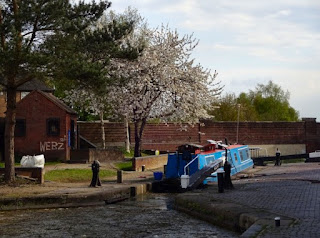 - Walsall Top Lock -
We're not being too ambitious with this trip and are aiming for an early evening finish, meaning we've just got the small matter of Walsall town centre to come. A steady look at the lock flight pays photographic dividends until we detour via Birchills Street and the Crown Wharf retail park. Our final calling point is Bar 10 (The Wharf) where a table beside the basin pontoons gives a good view of both the New Art Gallery and a 'Deep Water' buoyancy balloon. Closing Carlings in plastic glasses set the seal on our comeback crawl and we make our way back to Moxley satisfied with an excellent afternoon's work - cheers!
Posted by West Midlands Exploration at 9:01 am