Well the school bell has rung on another academic year and as excited pupils break up for the six week holidays, let's see what the teacher's report has to say about the class of WME in July...

Top of the form last month was WME Staffordshire, diligently compiling notes about the Barley Mow at Milford, some Trent & Mersey canal locks near Kidsgrove and a train at Longton, while also following-up a previous lesson about the Crown at Iverley. Definitely worthy of a couple of gold stars!

Also being studious was WME Sandwell, eagerly swotting up about pubs in Tipton. The Shrubbery gets a mention I believe, as does the now demolished Cottage Spring on Alexandra Road. Further credit is given for a towpath view near Swan Bridge on the Wednesbury Old Canal and a picture of a Smethwick area corner shop - good work!

WME Walsall and WME Wolverhampton have figured prominently in class projects all year and continue to make valuable contributions. In the case of Walsall, examples in July include the Hardwick Arms in Streetly and the Travellers Rest in Moxley, while Wolverhampton fashioned together the Bluebrick, the Yew Tree in Merridale and a picture of St Gregory the Great Parish Church near Wednesfield. Teacher is very pleased with the solid progress shown by these two students in 2015.

Every class has its quieter members but it has been encouraging to see both WME Solihull and WME Coventry growing a little in confidence of late. Coventry in particular presented an exercise book featuring Sir Frank Whittle's statue and the Elms Harvester at Allesley, whereas Solihull reported back on a field visit to the Grand Union canal near Knowle by presenting a photograph of Kixley Bridge.

Gaining marks for effort if not for quantity, the remainder of the class also produced a few meritable moments of inspiration. WME Birmingham brought in a Summerfield Park picture from Winson Green/Soho; WME Dudley told of a return visit to Upper Gornal's Jolly Crispin, likewise WME Telford for the Queens Arms in Dawley Bank; WME Warwickshire found a train at Stratford-upon-Avon, and finally WME Worcestershire gathered a solitary snap of Hartlebury's station sign. Headmaster Mr WME gives his seal of approval to all concerned, and we anticipate a few August additions to prepare us for the start of next term...
Posted by West Midlands Exploration at 8:38 am No comments:

Another Pub Bites The Dust!

The Bushbury area of Wolverhampton has lost a number of pubs over the years and now one more has been added to that list following the demolition of the King Charles on Northwood Park. The news prompted me into doing another of my occasional local walks... 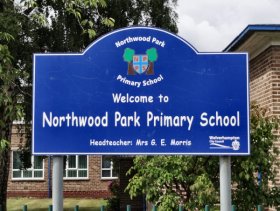 - Northwood Park Primary School -
My stroll commences at Sandy Lane where I remember the old Bushbury Pool and swimming lessons of my youth. The nearby allotments seem to be growing well with some plots marked out using pop bottles on sticks. St Mary's Churchyard is a place of quiet reflection while Northwood Park Primary School has fallen silent during the school holidays except for the caretaker mowing the lawn. 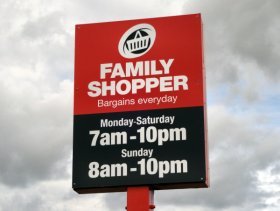 - Family Shopper -
Further along Collingwood Road, the Family Shopper supermarket has been trading for a couple of years or so in the building formerly known as the Staffordshire Volunteer; Collingwood Library has settled into its new home in the Broadway Gardens sheltered housing scheme over a similar period. My wandering by coincides with the postman going about his deliveries as the 32 and 33 buses pass each other on their respective terminal loops of the estate. 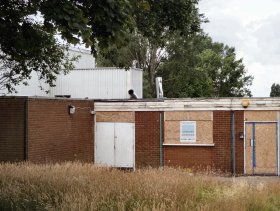 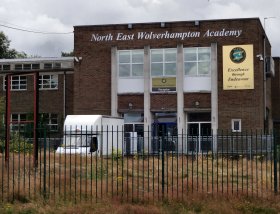 - Northicote School -
The neglected appearance of the community centre is matched by that of the neighbouring Northicote School buildings which latterly became the Northwood Campus of the North East Wolverhampton Academy. The academy's site at Pendeford has become the focus of education provision however, leaving the facilities here somewhat surplus to requirements. I understand that the old school will return to use though this autumn as the temporary home of the University Technical College which will ultimately be based at the redeveloped Springfield Brewery. 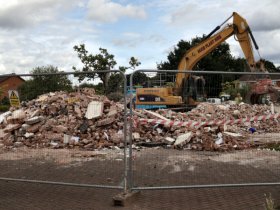 - King Charles Gets Executed! -
To Cavalier Circus next where the fate of the King Charles is confirmed, a JCB completing the final acts of demolition amid piles of rubble. D9 and I called in for a pint and a game of darts last year, a visit that has an added poignancy now - the pub was a standard Banks's estate-type establishment, not especially impressive in truth but still a lost landmark all the same. 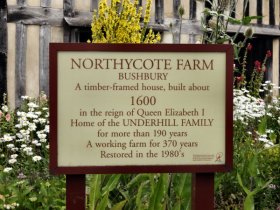 - Northycote Farm -
My last few photo targets had been rather depressing so a visit to Northycote Farm was necessary to recover a cheerful disposition. Fields and footpaths provide a chance to stretch my legs further, enjoying a bit of sunshine despite the unseasonably cool temperatures. 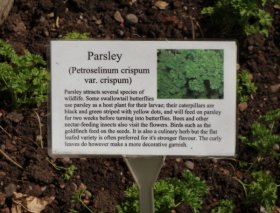 - Herb Garden -
I had hoped to get my customary pictures of the animals but there was some kind of farm management activity taking place that meant the enclosures were out of bounds. Instead I consoled myself with a look around the herb garden where parsley and chives were among the specimens being cultivated. The tea rooms in one of the barns looked (and smelled!) very tempting hence proving popular with young families. 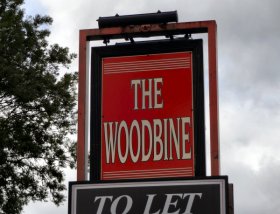 - Woodbine Sign -
I have one final calling point in mind before heading home so Moreton Road leads me down to the Woodbine, another pub I sampled last year with D9 that has subsequently closed. Perched on Wood Lane next to the railway bridge, the building is still standing and could yet reopen, especially if the proximity to the train tracks deters any potential housing developers. A watching brief will be required to see what if anything happens here, but for today my photographic work is done.
Posted by West Midlands Exploration at 12:18 pm No comments:

As if by magic we have more marketing to report, this time detailing the Board's afternoon activities within the bounds of Walsall. Caldmore and Leamore were the areas in receipt of special attention on this occasion... 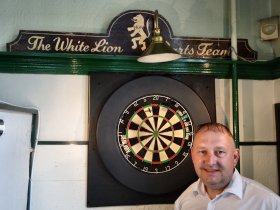 - White Lion Darts Winner -
It's hello from Highgate to begin with and a glimpse of The Gorway, home to Walsall Cricket Club. The Secretary then summons up an item from his extensive sleeve repertoire when a disused windmill is revealed down a cobbled alleyway. Our first pub of the day is an old favourite on Sandwell Street where the White Lion features televised Davis Cup tennis at the deep end of the bar. We can't resist staging our own sporting spectacle and it's Chairman D9 who soon leads on the darts, Secretary WME distracted by trying to operate the electronic scoreboard correctly. 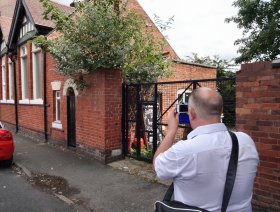 - In Search of Caldmore Closets -
The Chairman soon switches his focus to his favourite topic (old toilets) when investigating a possible closet adjoining the White Lion, meaning the bald spot gets an early airing. A portion of Palfrey includes painted Mitchells & Butlers off licence signs on Spout Lane plus a wander along Watery Lane where Mr D9 nearly gets swallowed whole by an abandoned settee. 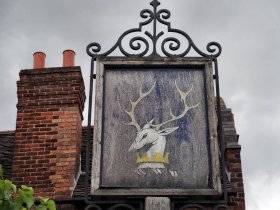 - White Hart sign -
Caldmore Green has attracted a few mentions on this blog over the years but it always merits a return look, especially with the White Hart on hand to contribute its landmark qualities. The former pub's sign is in line for a prized picture today, standing proudly outside a building converted into residential flats a good while back. The Chairman is more interested though in tales of an underground toilet that once stood opposite the pub in the vicinity of Watery Lane. 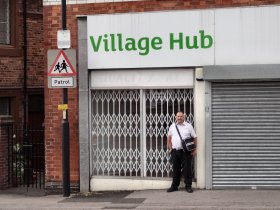 - The Village Hub -
Always eager to promote the hub cause, the Chairman seizes on an ideal marketing opportunity courtesy of the Village Hub, one of the shopfronts looking out over the Green itself. Caldmore Road then leads us temptingly towards Walsall town centre as we keep an eye out for any sidestreet gems. 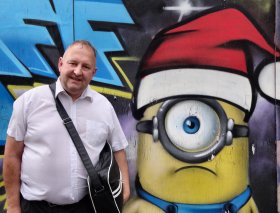 - Despicable D9 meets a minion -
In Walsall itself the St Matthews Quarter project is an ongoing regeneration scheme aiming to breathe new life into what had become a neglected corner of town. The Asda supermarket has been in place for a few years now while a new Primark store nears completion. Some buildings adjoining High Street and Lower Hall Lane are also earmarked for development, while colourful hoardings give D9 chance to practice his supervillain impressions accompanied by a rather startled minion. 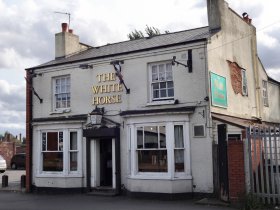 - The White Horse -
A Cherry Blonde in the Black Country Arms precedes the Leamore leg of the afternoon. On the way we stop off in Birchills where the Tannery pub on the precinct has been demolished. The White Horse is still going though, a detached whitewashed Banks's local where the Chairman displays more of his new-found darting prowess - perhaps he was inspired by a Pet Shop Boys soundtrack as the Secretary wondered "What Have I Done To Deserve This"? 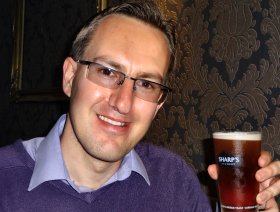 - The Secretary gets Crowned -
On previous visits to Leamore, Secretary WME had noted how the area had lost several pubs in a relatively short space of time - cases in point are the Four Crosses (now the site of a KFC), the Black Horse and the Butlers Arms. One bit of brighter news is the reopening of the Crown on Leamore Lane so we call in to test out the new carpet and watch some of the Open golf. We should not forget the Lamp Tavern (a Holden's place very much going strong), and it's useful to see progress with construction of the new Bloxwich Leisure Centre which is due to open by summer 2016. 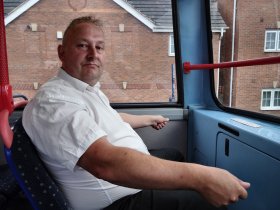 - Driving Duty on the 89 -
At the Chairman's request, it was time to go full throttle through Bloxwich. The Hatherton Arms on Reeves Street was an interesting find, not too far from the site of the original Bloxwich railway station (the Station Hotel is still standing but closed as a pub some years ago). The Bell meanwhile has been recently refurbished but retains a traditional layout with an appealing smoke room - Secretary WME is pleased that the pub is no longer under threat. The D9 bladder necessitates a couple of splashes and dashes (possibly encountering a Spotted Cow) before the accelerator is kept firmly to the floor with some dramatic driving on our homeward 89. Cheers!
Posted by West Midlands Exploration at 8:25 am No comments: