Was there ever such a thing as a Bald Cavalier?

Thursday 23rd May 2013 will go down in history as the day when the Kidderminster Beer Festival was resurrected. Apparently the town hosted a real ale event some years ago, but the one due to commence in the Town Hall was effectively a case of starting again from scratch. Needless to say, Nick and I were very keen to be present at such a momentous occasion… 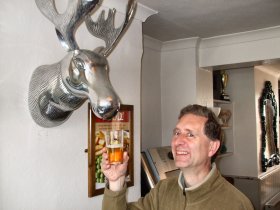 - A Moose Moment -
We begin the afternoon by catching the train down from the West Midlands, exiting Kidderminster Station in search of our first tipple of the day. Tucked away on Farfield (just behind the Worcester-bound platform) we find the Station Inn on the end of a pretty row of cottages. The pub has earned Good Beer Guide recognition and is where Nick makes the acquaintance of a silver moose that was apparently quite partial to a drop of Enville Ale. 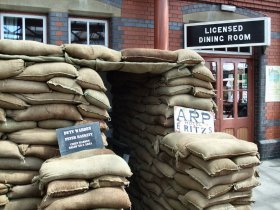 - Preparing for War -
Maintaining the railway theme, we move across to the King & Castle, housed in the Severn Valley station and retaining the style of a GWR waiting room. We savour a half of Holden's Kennedy's Carouse, part of the brewery's 2013 series of World Leader monthly specials, and then take a wider look around the station concourse where preparations are underway for a wartime weekend over the Bank Holiday. 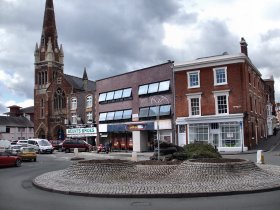 - Bull Ring, Kidderminster -
Continuing down into Kidderminster Town Centre, we pick our way through the market stalls by the Swan Centre and make use of the Thursday Curry Club deals available at Wetherspoons. The Penny Black overlooks the Bull Ring area of town and features a portrait of Sir Ralph Clare, a prominent local Royalist during the English Civil War. 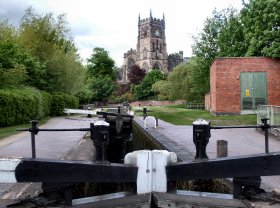 - Kidderminster Lock -
It isn't all pubs and beer today as we take time out for a towpath trail along the Staffordshire & Worcestershire Canal. We cover the short section from Caldwell Hall Bridge (Castle Road) to Limekiln Bridge (Clensmore Street), a stretch which includes Kidderminster Lock as overlooked by the mighty St Mary's Church. The walk gives us time to debate where our Civil War allegiances might have lain, prompting the question whether one could ever be a Cavalier without having a headful of flowing locks. 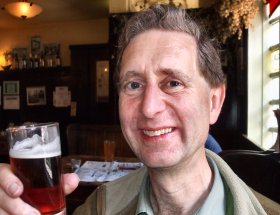 - In the Olde Seven Stars -
Finding our way to Coventry Street, there was one pub in town we were keen to try above all others. The Olde Seven Stars has won recognition as a local CAMRA Pub of the Year and we simply had to investigate, discovering a place with wood panelling, hop decorations and an inglenook fireplace. We sample some Auntie Myrtle's ale (brewed in Leominster) and note a leaning towards all things Norwich City, including piles of football programmes and the occasional picture of Delia Smith! 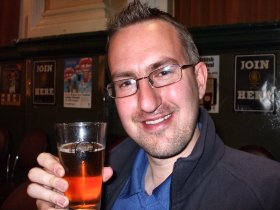 - Enjoying the Festival -
Time then for the festival itself, which was now well underway in the Town Hall and as CAMRA members we could get in for an advance preview before 6pm. The theme of the event was the Penny Black in honour of Kidderminster's famous son Sir Rowland Hill, hence the envelope logo on the commemorative glasses and the volunteers' t-shirts. Local breweries were showcased alongside a selection of Yorkshire ales, and among those we sampled were Going Postal, Worcestershire Sway, Saltaire Elderflower, Kinver Over the Hill and the William Mucklow's Dark Mild. The event made a promising first impression and was very welcoming with a relaxing, celebratory atmosphere - long may it continue! Nick was especially enthusiastic about the whole thing, although that probably had something to do with being given more tokens than everybody else! 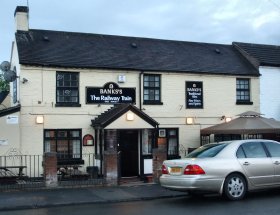 - The Railway Train -
With those tokens all spent, we take our leave from the Town Hall and troop a few steps across the road to see what the Swan had to offer (a closing half of Cannon Royall's Hood as it turned out). All that then remains is to return to the station for our homeward train, although we take a slight Offmore Road detour to locate some pubs for future reference, one of which was the Railway Train seen above. The only obstacle on the way back was a thirty second connection window at Smethwick Galton Bridge, and when that was negotiated successfully we knew that we'd had a very good afternoon indeed!
Posted by West Midlands Exploration at 8:56 am No comments:

Friday 17th May and the heartlands of the Black Country are firmly in focus as the Hub Marketing Board tour Sedgley and Gornal on their latest adventure. Here is a pictoral parade of the afternoon's entertainments... 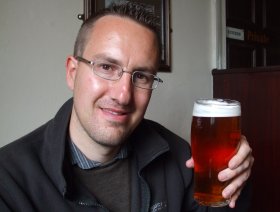 - Secretary in the Old Ash Tree -
We commence by heading out of Wolverhampton with an investigation along the Dudley Road, noting the transformation of Blakenhall Gardens where the old tower blocks are long gone to be replaced by new houses and a shopping precinct. The Chairman gets a little too excited about the prospect of the Punjabi dancers advertised at the British Queen, but in fairness he does restrain himself by visiting the Old Ash Tree instead.

- The 1 Experience -
Leaving Fighting Cocks behind, we make use of the 1 for our ride up to Sedgley. The route is now operated by a fleet of smart hybrid electric buses complete with a Black Country voiceover announcing the upcoming stops. Naturally enough, the Chairman couldn't resist driving one for himself... 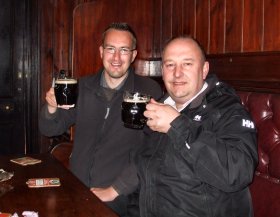 - Cheers from the Beacon -
When in Sedgley, a call in at the Beacon Hotel is simply a must. As if the timewarp Victorian period interior isn't enough to enjoy, the pub is also home to the Sarah Hughes Brewery and it's flagship ale Dark Ruby Mild. Surely one of the best pubs and best beers in the whole country! 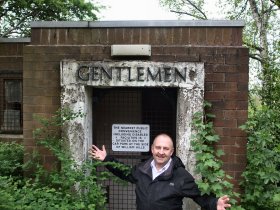 - The Sedgley Closet -
Fortified by our Ruby, we set off for the centre of Sedgley in search of sleeve items to keep the Chairman occupied. The old public conveniences on Gospel End Street certainly fit the bill! 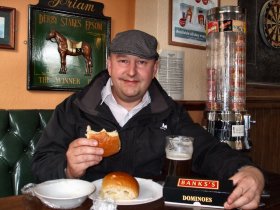 - Flat Cap in the White Hoss -
Next on the pub radar was the White Horse where the Chairman is seen modelling the full Black Country regalia complete with crusty cobs, flat cap, traditional ale and dominoes. 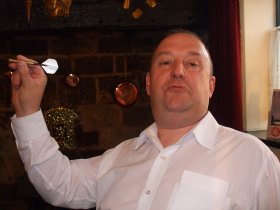 - D9 Destroyer goes for the kill -
To Upper Gornal then and the Jolly Crispin Darts Challenge. Some Fownes' ales are sampled as the D9 Destroyer beats the WME Whirlwind by two legs to nil, although our usual ineptitude when attempting to hit trebles and doubles was still very much afflicting us. 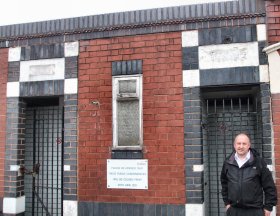 - The Gornal Closet -
Our early evening wanderings take us down the hill through Lower Gornal towards Gornal Wood. This is serious pub territory with far too many tempting options to squeeze into one afternoon - you really are spoilt for choice with Bathams and Holdens representatives plus the Black Country Ales brewery tap all in relatively close proximity. Honourable mentions must go to the Old Mill (for the bar snack nibbles) and the Old Bull's Head (where the Chairman completed the darting whitewash), not forgetting of course the Gornal Wood bus station closet next to the Red Lion. 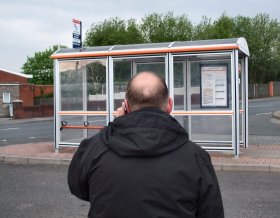 - Bald Spot at the Bus Hub -
And finally, our festivities end with a mini-circuit of Gornal Wood, noting the Fiddlers Arms and the Woodman before rounding it all off in the Red Lion. We then nip outside to the bus station where the Chairman awaits collection, his bald spot dappled in the shadow of the Zoar Chapel. It had been an epic afternoon and yet we'd barely scratched the surface of what Sedgley and Gornal have to offer - there might well be a bit more marketing to do across that neck of the woods before too long...
Posted by West Midlands Exploration at 5:55 pm No comments:

Every so often one feels the need to get away from it all by taking a well-earned break. The destination for my family holiday this year was Felixstowe, so on Friday 3rd May we set our sights on the East Coast and I prepared for some superb Suffolk exploration. Here's what I got up to... 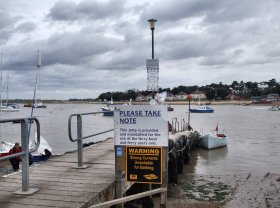 - Jetty at Felixstowe Ferry -
Saturday 4th May: having settled in and got some bearings on the Friday afternoon, Saturday then involved some wanderings along the coastal path to the small hamlet of Felixstowe Ferry. Here a small boat crosses the River Deben to connect with Bawdsey on the opposite bank, and there are some imposing martello towers keeping watch over the nearby golf course. 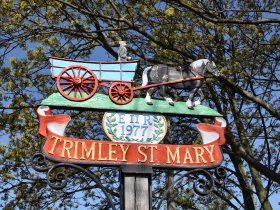 - Trimley St Mary -
Sunday 5th May: a glorious sun-filled morning sees me taking a stroll out to the neighbouring villages of Trimley St Mary and Trimley St Martin just as the local parishioners made their way to church. Trimley Station offered me the prospect of some railway photography and I even had a ferret around the container port on my way back into town. 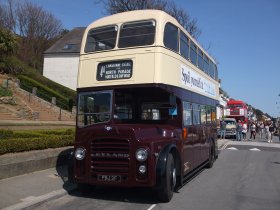 - Vintage Bus on the Prom -
Sunday 5th May continued: the afternoon brought with it an unexpected bonus when we heard that a vintage vehicle rally was taking place on Felixstowe Promenade. The collections from Ipswich Transport Museum were out in resplendent force with the highlight being a procession of classic cars along the seafront. The crowds lapped up the displays and the weather with considerable enthusiasm. 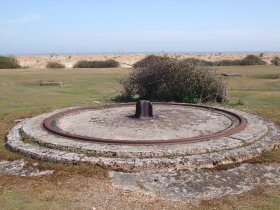 - Gun Station on Landguard Peninsula -
Monday 6th May: what's this, a sunny Bank Holiday Monday, surely not?! In truth you could not have wished for better weather, and the packed crowds along the promenade indicated that Felixstowe was certainly a popular place to be on such an occasion. We made our way to the quieter surroundings of the Landguard Peninsula where the ominous Landguard Fort complex dominates a landscape dotted with military and defensive remains. 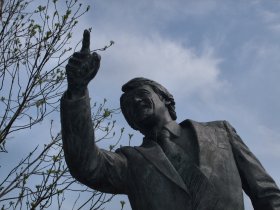 - Sir Bobby Robson -
Tuesday 7th May: perhaps my favourite day of the entire holiday came as we took the train to Suffolk's county town, Ipswich. It was fascinating to investigate Portman Road football stadium (home of Ipswich Town FC) and the regenerated waterfront area with its sparkling marina. The afternoon saw us sampling a couple of Ipswich's finest pubs, notably the Dove Street Inn (where some green beer made an appearance) and the wonderful Fat Cat. 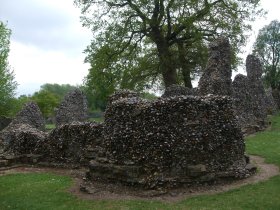 - Abbey Ruins -
Wednesday 8th May: another day of exquisite exploration, this time centering on Bury St Edmunds. After a mooch around the railway station I revelled in taking photographs of the beautiful Abbey Gardens, clambering over the ruins and admiring the spectacular floral displays. The town is full of charm and character, particularly on a busy market day, and other points of interest include the Nutshell (reputedly the smallest pub in the country) and the Greene King Brewery. 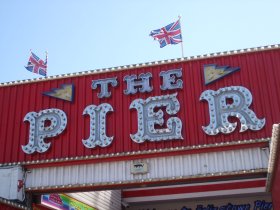 - Felixstowe Pier -
Thursday 9th May: our last full day spent in Suffolk is a relaxing one just staying in and around Felixstowe. The seafront breezes give us a buffeting during a return walk to Felixstowe Ferry, and there's a chance to round off my photos of the main town with shots of the Pier and pubs such as the Buregate - not forgetting dodging the seagulls whilst indulging in some seaside fish and chips. All in all it was a wonderfully memorable holiday in the best spirit of the Suffolk seaside tradition.
Posted by West Midlands Exploration at 9:47 am No comments:

Among the cut and thrust of WME photostream development, some months tend to be more productive than others. April 2013 was a slowish month as updates go, but we can still rake over the coals of the pictures that did put in an appearance...

Posted by West Midlands Exploration at 8:59 am No comments: