The Barley Mow and Other Stories

The Hub Marketing Board were men on a mission as Friday 23rd August 2013 had them scouring the Black Country in search of endangered pubs and the usual mix of odd curiosities... 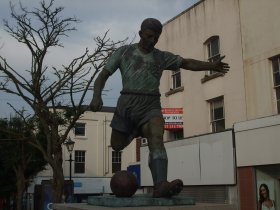 - Duncan Edwards Statue -
A breakfast meeting is scheduled for Dudley at 8:30am, and with all members arriving promptly there are definitely no cobs on the menu. We say hello to Duncan Edwards then catch an early sighting of the Full Moon. 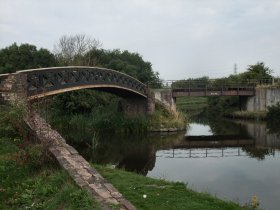 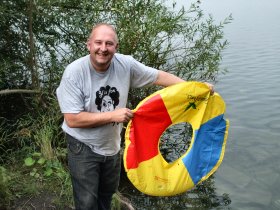 - Fancy a Paddle ? -
Passing Lodge Farm Reservoir, the Chairman decided he needed to soothe his aching feet by going for a paddle. I'm not sure the rubber ring suited him though. 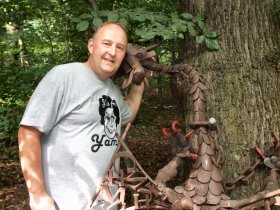 - With the Dragon at Saltwells -
Saltwells sees members on the lookout for a possible sleeve item courtesy of the Chairman. Unfortunately his intended target of Saltwells House, a former manor built for the Earl of Dudley, was demolished a few years ago so we have to satisfy ourselves with the sculpture trail instead. The Chairman is spooked out by a few of the exhibits, especially when he encounters the dragon waiting for him in the woods. Such an ordeal meant an escape to the Merry Hill Centre was urgently required. 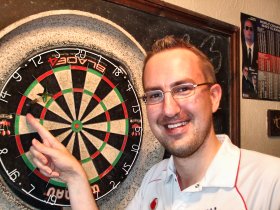 - WME Whirlwind wins a leg -
The exploration action quickly moves to Wordsley where the Dock Off Licence and the Bird in Hand pub are always amongst the Secretary's favourite photographic targets. We investigate the ruins of the old Stuart Crystal factory just across from the Red House Glass Cone, fascinating fragments of local industry. An opening ale in the excellent Bird in Hand is followed by a darts match in the Old Cat where the Secretary miraculously wins a leg and leaves the Chairman stunned speechless (although perhaps we should gloss over the fact that Mr D9 still won the contest 2-1 overall) 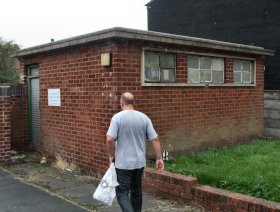 - Bald Spot bears down on Wordsley Closet -
Wordsley is also home to the New Inn Bathams pub whilst next door to the Cat is an old public conveniences that closed down a couple of years ago. Luckily the Chairman's bladder is able to cope with such happenings today as we note that the Red Lion on Wordsley Green has become a Sainsbury's. 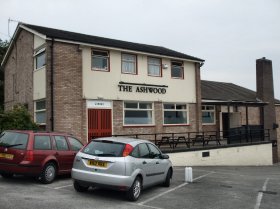 - The Ashwood -
Our next destination is Ashwood Park, making our way down Bells Lane for a look at the Ashwood, a Banks's estate pub that looks like it dates from the 1960s. The Chairman might have been in line for the Discount of the Day award down here but got persuaded by the locals into buying a more expensive drink. 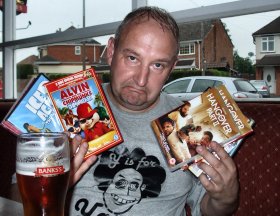 - DVD distress in the Barley Mow -
Mr D9's mood does not improve as we move along to Wollaston Farm. Having got all excited about some discarded DVDs he picked up on the Kingsway, he then discovers he's got a load of empty cases with no actual discs. At least he can console himself with a last ever look at the Barley Mow, a pub whose doors are set to close forever in the coming days to make way for another supermarket conversion. Unfortunately for the Chairman, it was the Secretary's round in here with Mr WME pocketing a very satisfying price to secure the spreadsheet honours.

- A driving demo on the 276 -
A sweep of Wollaston and Oldswinford keeps everyone fully occupied on the afternoon, with the meaning of a quick half being put to the test in the Gate Hangs Well when the 276 was spotted at short notice. A visit to Mary Stevens Park allows for a further bout of closed closet camerawork, and the Secretary was very pleased to finally set foot into the Crown on Hagley Road after several previous failed attempts at sampling this with Mr SBI. 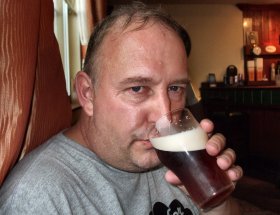 - Testing out the Ten Arches -
Gearing up for our evening endeavours, the X96 is on hand for a quick pit-stop on Penfields Road where the Ten Arches satisfies the Chairman's craving for more modest pub architecture. We couldn't possibly attempt the Delph Run after our earlier exertions but the Bull & Bladder did offer a little flavour of what we can look forward to on a future outing, aided and abetted by a hearty cheese and onion roll. 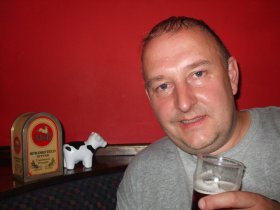 - The Ocker Hill finale -
That would normally have been that but the opportunity of some Wolves football action meant that our curfew was extended a little as we pitched up in Ocker Hill, Tipton.
Pub possibilities here include the Goldmine Bar, the Waggon & Horses (the taphouse of the Toll End Brewery) and the Jolly Collier, although it was the latter that brought the curtain day with a little help from a Springfield Bitter relic and a squeezable stress cow. As always there had been much adventure, photography and silliness, plus good beer in reasonable moderation, all adding up to a fun-filled and memorable marketing session. Cheers!
Posted by West Midlands Exploration at 12:58 pm No comments: 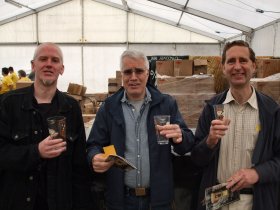 - Poised for action -
Our journey to the festival was eventful in itself, with vandalism on the line between Kidderminster and Worcester meaning we had to catch a rail replacement coach. We arrived in Worcester just on mid-day and headed straight for the festival, securing our glasses, programmes and all-important tokens before eagerly surveying the available ales. 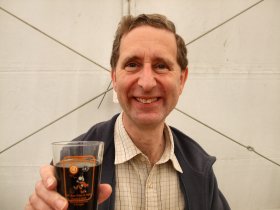 - Plum Dunkelweizen -
It seems that the Friday sessions at the festival had been extremely popular, hence quite a number of the beers were either sold out or unavailable. There was still plenty to go at though, and among the tipples we tackled first off were Signal Light, Black Hill Stout and Plum Dunkelweizen - bringing out Nick's inner German - whilst I was dangerously waylaid by an Exmoor Beast. 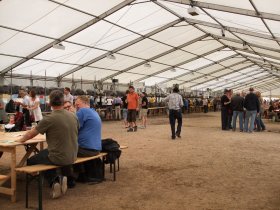 - Inside the Big Tent -
We commandeered ourselves one of the picnic tables in the main marquee from which we had a fine view of all the offerings lined up along one side of the tent. Our next spot of token expenditure resulted in samplings of Ginger Doodle Stout, Blonde Bombshell and Old Dairy with me being tempted into a Raspberry Wheat Beer from Millstone. Roger and I were also keen to make the acquaintance of a Cherry Blonde, which turned out to be a highly pleasurable experience, whereas Nick came over all punk courtesy of Clash London Porter. 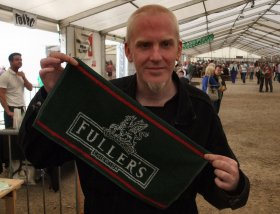 - A Tombola Triumph -
Mr D9's absence was lamented given that the event organisers had once again laid on personalised Andyloos especially in his honour, although those of us in attendance were happy enough to make use of the facilities on his behalf! It was soon time to account for our final round of tokens, whereby it was Nick's turn to brave the Exmoor Beast. Roger found himself a Desert Rat and Mr W Snr dredged up a half of Old Slug Porter, leaving me to detect a bit of Skulduggery when Rog won a beer towel on the tombola.

- Fun and Games with a Beermat -
Taking our leave from the festival, we set out on a little crawl of the pubs in Worcester's historic centre. First up was the Plough on Fish Street with its unspoilt traditional parlour interior, a place that quickly became the setting for our unspectacular attempts at beermat flipping. Roger demonstrates how it should be done. 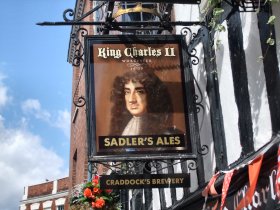 - The King Charles II, New Street -
Two other pubs high on our hitlist were the Cardinals Hat (reputedly Worcester's oldest inn and recently resurrected after a period of closure) and the King Charles II which has latterly been taken on as a joint venture between the Sadlers and Craddocks breweries. Worcester's status as a real ale destination has certainly been boosted by the re-emergence of these establishments and we hope they both prove to be highly successful. 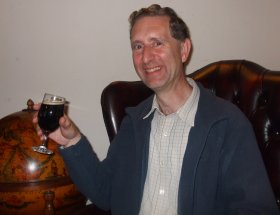 - Nickolenko achieves global fame -
The King Charles II particularly grabbed our attention with its Tudor origins and unnerving uneven floors - at one point my Sunchaser tried to make a break for freedom by sliding itself off the table! The first floor had a cosy seating area complete with a globe and several rather comfortable armchairs, very nice indeed. Having supped up in here, we moved next door to the Swan with Two Nicks where we took advantage of some discount prices to imbibe some Malvern Hills Trevor Stout or some Draught Bass. As if the thought of two Nicks was not alarming enough, Dad also spotted a poster for ukelele lessons but thankfully we managed to distract him! 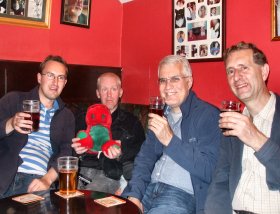 - Cheers from The Dragon -
With rail services restored, the 18:51 Foregate Street departure is nominated as our train home. We just have time to squeeze in two more hostelries, these being the Paul Pry (a heritage pub on The Butts which has some particularly attractive interior tiles) plus our old favourite The Dragon where we are joined in our group photo by a cuddly little mascot. From the festival to the town, the beer quality had been consistently impressive and we made our way back to the West Midlands having had a thoroughly splendid time. Cheers!
Posted by West Midlands Exploration at 3:41 pm No comments:

Between Friday 2nd and Monday 5th August, Warwickshire took on Yorkshire in a County Championship cricket contest at Headingley - Stephen and I were there to watch the action and indulge in a little West Yorkshire exploration... 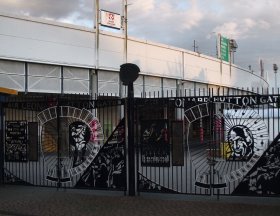 - The Len Hutton Gates -
We travelled up to Leeds on Thursday 1st August, arriving at the Headingley Lodge just on 5pm. After settling in we decided to reacquaint ourselves with the neighbouring rugby and cricket grounds before venturing out to the nearby Arcadia bar for an evening pint or two. 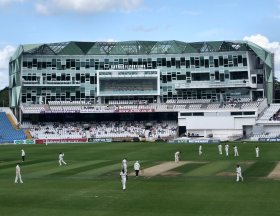 - A cricketing scene from Headingley -
The match gets underway on Friday morning with Warwickshire winning the toss and putting Yorkshire into bat. The first two days saw Yorkshire marginally in the ascendancy, the home side making 302 underpinned by a century from Gary Ballance followed by the Bears reaching 221 for 8 with Laurie Evans scoring 88. 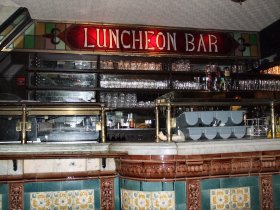 - Whitelocks Luncheon Bar -
The third day's play saw Warwickshire take command of the match, firstly by reaching 309 all out courtesy of some lower order runs from Keith Barker (49) and Jeetan Patel (63), then by reducing Yorkshire to 148 for 7 in their second innings. We were therefore two rather contented Bears supporters as we headed out for a Sunday evening in Leeds, sampling the Hedley Verity Wetherspoons, the Victoria Family & Commercial Hotel and the wonderfully historic Whitelocks down an alleyway off Briggate. 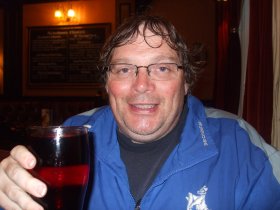 - Cheers to a decent draw -
Sadly the weather intervened on the Monday morning and play was delayed until mid-afternoon, although we did get to watch some Ashes action courtesy of the TV coverage from Old Trafford. Upon the resumption at Headingley, Yorkshire were bowled out for 180 leaving the Bears with a target of 174 runs for victory. The chase had only just begun when bad light and more drizzle ended proceedings, the match ending tamely as a draw. The result at least continues Warwickshire's recent upturn in performances and we felt we might well have won if the weather had been a little kinder. 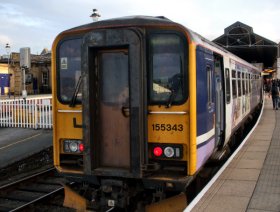 - Train at Huddersfield -
The match might be over but we can still enjoy our final evening in West Yorkshire by taking the train out to Dewsbury and Huddersfield. Both towns have impressive pubs as part of their railway stations, with the West Riding Refreshment Rooms and the Head of Steam proving very atmospheric. I was particularly impressed with Huddersfield in general actually, the town had some seriously grand Northern architecture epitomised by the station itself. Come Tuesday morning there's just time for a closing full English breakfast before we make the journey back home, satisfied with having enjoyed a few well-spent days of cricketing contentment.
Posted by West Midlands Exploration at 2:05 pm No comments: