Covid has made it inevitable that certain locations are cropping up in my explorations more than they normally would, but there are still new angles to unveil and exciting discoveries to make in even the most familiar of places. Take Wombourne for example, partially covered during February's Trysull Trek and now back for more in May... 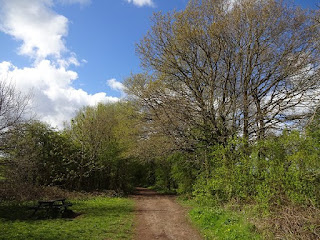 - Approaching Penn Halt -
Arguably my most regular haunt of the lot over the last year has been the Smestow Valley/ South Staffordshire Railway Walk which finds itself press-ganged into service yet again. Friday 7th May's outing therefore commences with the section from Castlecroft to Lower Penn, revisiting Penn Halt and generally appreciating the burgeoning greenery with leaves adorning the treetop canopy. Lower Penn itself seems tranquil enough in the sunshine and I can't resist getting a few village green shots near St Anne's Church and pretty Rose Cottage. 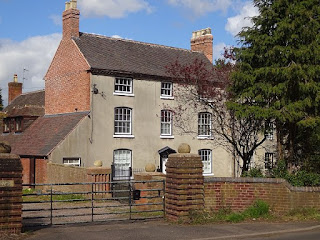 - Orton Grange -
By way of variety, I want to pick out a public footpath I last walked nearly fifteen years ago (June 2006, when my blog posts were minimal to say the least!); the turning is just after the church and takes me over the fields to Orton via various kissing gates, a set of wooden steps and a close encounter with some thankfully docile cows. Showell Lane and Flash Lane received the WME photo treatment last August so this time around I concentrate more on Orton Lane, passing several notable properties such as Orton Grange. 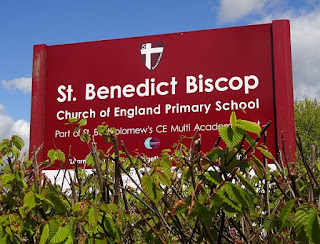 - St Benedict Biscop School -
I reach the fringes of Wombourne much quicker than I'd expected although it takes me a little while to wend my way towards the village centre. Billy Buns Lane is served by the number 15 and 16 bus routes before Wood Lane leads me into a residential estate notable for shops on Bull Lane (the Golden Valley takeaway, a hair salon and a tanning parlour among them). I can hear children's laughter nearby so I'm not surprised to stumble upon St Benedict Biscop Primary School, the playground in full cry at mid-morning break time. 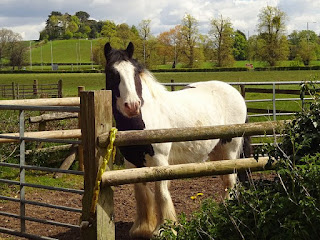 - A Smallbrook Farm Steed -
Wombourne has expanded significantly even in my lifetime so it's nice to get a sense of a previous way of life. Smallbrook Farm lends a more rural atmosphere with hay bales and inquisitive horses while Battlefield Hill is quietly screened from the A449 dual carriageway - the Red Lion here has always struck me as a particularly homely little pub. The reference to a battlefield is certainly intriguing, whereby it has been speculated that Wombourne may have featured during the 910AD campaign against the Vikings (associated perhaps with the Battle of Tettenhall, the exact location of which is subject to some conjecture). 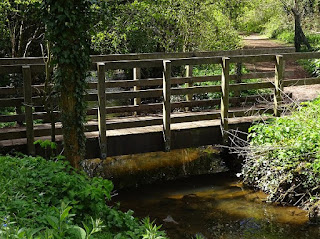 - Wom Brook Nature Reserve -
There's less mystery about my next target as the Wom Brook Nature Reserve is a popular walking route snaking its way beside the banks of a babbling stream. I did some of the trail years back but hadn't covered the eastern end until now, hence Pool Dam makes for an excellent find near the local scout and girlguiding bases. The nature reserve in full links Rookery Road with the Poolhouse Estate via Lower End and Ham Meadow, intersecting at times with the railway walk and the canal. I branch off via Mill Lane for glimpses of St Benedict Biscop C of E Parish Church and yarnbombing creations at the United Reformed Chapel. 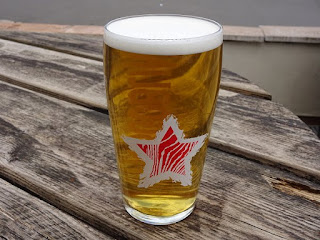 - Enville Ale at the Mount Tavern -
Isn't it great to be able to punctuate outings with the occasional pint again! The New Inn is my choice of Wombourne watering hole for this trip, sitting out the front with a Banks's Amber as the sun beams down, and I break my homeward journey on a spluttering 16 bus by alighting at Penn's Mount Tavern. This is a pub I hadn't been to since 2012 so it was high time for another look (even if it was recently frequented by a certain Boris Johnson MP). I wouldn't normally follow in the Prime Minister's footsteps but an exception is made in order to partake of the Enville Ale, perched on a planked table overlooking the Penn Road. Cheers!
Posted by West Midlands Exploration at 10:38 am