Somewhat sheepishly I find myself submitting the latest of my (supposedly monthly) digest postings and once again apologising for the lack of activity where the West Midlands Exploration photostream is concerned. Even by my own hit-and-miss standards things have been quiet this summer, as work and family developments have shifted my focus elsewhere for the last few months. I am still plugging away when I get chance though, so here's what August has had to offer in terms of Flickr arrivals...

Revving up for a whirlwind whizz around the region, let us begin with WME Birmingham and a note or two from Northfield where the Clock Cafe, the Black Horse and Bristol Road South have all made appearances. A rummage in Rubery reveals the Cock Inn's emergence while a short sprint to Stockland Green shows the former Stockland pub in its 'Modern China' restaurant guise from March 2010.

Where to go next then? How's about WME Dudley - or Pensnett to be specific - where we can now find archive pub pictures of the old Queens Head pub on Commonside (since demolished) and the Talbot (still going but now known as the Lenches Bridge). Quarry Bank queues patiently before unleashing shots of the local Labour Club and the former New Inn, while Ashwood Park estate summons up a Sandringham Road streetscape.

Wiggling over to WME Walsall, we can pause at Pheasey to take in the local branch library along with the Cat & Fiddle pub, or there are canal contributions from Riddian Bridge (Daw End Branch) and Ogley Junction (Wyrley & Essington). Those of you of a botanical persuasion might like the Northycote Farm herb garden, recently landed on WME Wolverhampton where Blakenhall's Phoenix Park is also making its presence felt.

News now from a trio of S's which all have new albums to celebrate. WME Sandwell has been boosted by Great Barr (two wintry scenes from Red House Park) and a shot of the New Navigation on Lewisham Road, minus any D9-induced pick-up truck happenings. WME Shropshire's solitary contribution this time around is the Crown pub in Market Drayton, whereas WME Solihull doubles up with two Fieldhouse features from across Monkspath way. Just for good measure I throw in a W too, so how's about WME Warwickshire with the Rupert Brooke and Squirrel down in Rugby. Add them all together and it's still not a lot, but it just about keeps things ticking over and we'll see if I'm able to summon up any digest-worthy dealings to tell you about in September...
Posted by West Midlands Exploration at 10:39 am No comments:

The Chip Foundation narrowly avoided a chip-related catastrophe as their latest adventure took them on a tour of Oldbury, Langley and Bearwood... 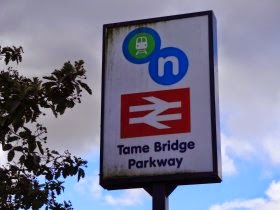 - Tame Bridge Parkway -
Tuesday morning and my camera is out early, tackling Tame Bridge Parkway for a few station shots before a steady stroll towards the Delves. My initial investigations also include Bell Lane with views of Delves Green, the local nursery school and then the Tiger pub on Walstead Road. 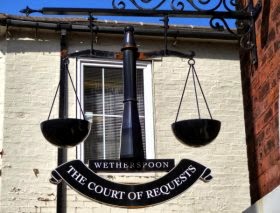 - Court of Requests -
Fast forward a few hours and at 2pm I await the arrival of my Chip Foundation colleagues fresh off their 51 bus from Perry Barr. A brief campus tour is followed by a ride down to Oldbury, calling into the Court of Requests for an opening half. This Wetherspoon's establishment is housed in the town's former library, a building that previously was a courthouse and prison, a heritage the current interior pays tribute to with vintage bookshelves and references to the justice system. 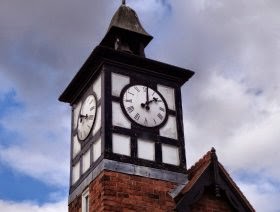 - Langley Park Lodge -
Moving onwards, our next calling point is Langley where the Crosswells Inn is situated at one end of the local High Street. The area retains a run of terraced stores, some with pleasingly traditional shopfronts opposite the local park - sadly our intended chip shop wasn't open but the Enville Ale in the Crosswells did meet with our approval. 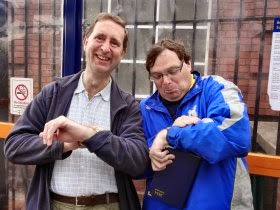 - Dodgy Timetable? Blame D9! -
Having been thwarted in our quest for chips, the bus network decided to throw an additional spanner into the works. We waited over half an hour for a 120 when typically two turned up together, and even though a certain Mr D9 might not be directly to blame we still decided to hold him responsible anyway. Once on board, we enjoyed the journey down to Bearwood passing the Merrivale, the Queens Head, Thimblemill Library and Smethwick Baths. 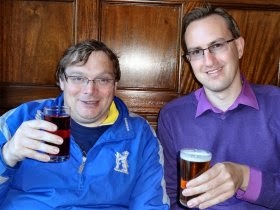 - The Midland -
Our Bearwood brief required a visit to the Midland, a newly-opened Black Country Ales pub housed in a former bank. I have to say I was very impressed with the quality of both the building and the beer - the bank frontage is very prominent on Bearwood Road whilst within are features including an etched bar-back mirror and a Chubbs safe door.
Well worth a visit! 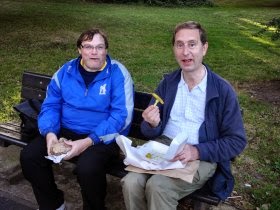 - The Penultimate Chip -
We were still struggling for our chip quota and further frustrations befell us when two Bearwood takeaways were also closed. A bit of contingency planning was required before the Abbey Fish Bar came to the rescue and the gents could munch their spoils in the comfort of Lightwoods Park where we had the summer funfair for company - thankfully Stephen resisted the urge to go on the bouncy castle. A closing drink in the nearby Dog rounded off this Sandwell session, and it was over to our respective 126's to get us safely homewards.
Posted by West Midlands Exploration at 10:29 am No comments:

Into August and a brace of beer festivals keep Nick and myself occupied on consecutive Fridays. Stafford and Worcester would be our destinations although things didn't quite go as expected... 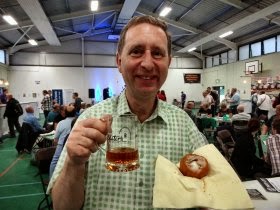 - Savouring Stafford -
First up is Friday 1st August and our evening in a rather soggy Stafford. Drenched by a devious deluge, we were rather grateful for the shelter afforded by the school sports hall where the 7th Stafford Beer Festival was taking place. Quite a few ales caught our collective eye including Pi, Old Wavertonian, Mutts Nutts and our old favourite the Chocolate and Vanilla Stout, although it was some Wibbly Wallaby that got Nick most excited - that and the prospect of his one-man mission to single-handedly relieve the tombola stand of their entire array of prizes! 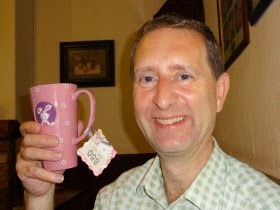 - A Typical Nickolenko Mug Shot -
The rain was easing off as we completed our evening with a little circuit of Stafford's pubs, even stopping momentarily to witness some of the Grand Prix cycle race taking place in the streets of the town centre. Our calling points were the Greyhound (just across from Stafford Gaol), the Olde Rose & Crown (Joules' taphouse on Market Street) and the Sun (the unmissable Titanic tap). Along the way Nick was only too happy to pose with the fruits of his tombola triumph although quite what he's going to do with a pink bunny mug is anybody's guess. 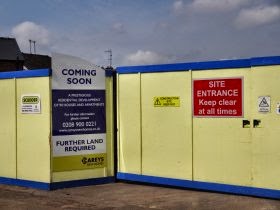 - Former Football Ground -
Fast forward to Friday 8th August and we're now bearing down on Worcester, eagerly anticipating the festival being held on the city's racecourse. Our train to Foregate Street arrives just after 11am, giving us time to squeeze in a canal walk from Westbury Street to St George's Lane where we note the site of the former Worcester City FC ground is being redeveloped for housing. 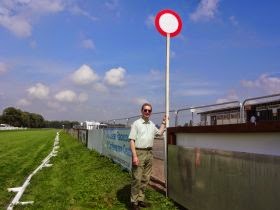 - At the Winning Post -
Making our way over to the racecourse, a large queue has formed in readiness for the festival's midday opening. Rather than wait we decided to seek out a bonus pub on the other side of the river, hence the Wheatsheaf on Henwick Road offered us Friar Tuck ale and some lovely Worcester views from the rear beer garden - it's not a place we'd have found ordinarily but we both rather liked it. This should have set us up nicely for some festival fun but alas it was not to be. Upon our return to the main marquee we discovered that the event was sold out and only those who'd bought advanced tickets online were being permitted inside - sadly we hadn't realised you couldn't pay on the door so it was a case of no ticket no entry, and even despite a certain royal resemblance our hopes were dashed! 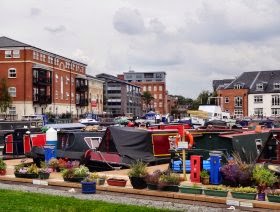 - Diglis Basins -
We weren't the only ones to be caught out in such a fashion, and there were certainly a few disgruntled mutterings to be heard in the Dragon where we supped some consolation Annesely Runner Stout while trying not to talk about female wombles (apparently a banned topic of conversation here). We were now in need of a contingency plan and settled upon canal a stroll down to Diglis Basins where we could admire the narrowboat moorings and explore the broad locks where the Worcester & Birmingham meets the River Severn. 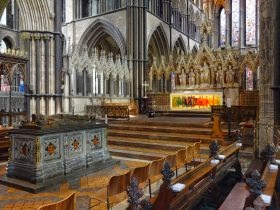 - Worcester Cathedral -
Our festival frustration did now mean we could see more of Worcester than would otherwise have been possible. The highlight of the day thus became our visit to Worcester Cathedral, an awe-inspiring place where history and architectural beauty surrounds you. Centuries-old stained glass windows, tombs and monuments provide plenty to catch the eye, while the crypt and cloisters are equally fascinating. We pause by the tomb of King John and take a peek in Prince Arthur's chantry. 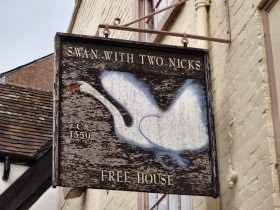 - Swan with Two Nicks -
We follow that spiritual interlude with some of our favourite Worcester hostelries. The Plough on Fish Street feels quite timeless with character (and characters!) aplenty, while the Swan with Two Nicks has a beer garden where we can listen to 'melodious traffic' (Mr Nickolenko's phraseology). The King Charles II offers up Mud City Stout to go with the globes, bulging walls and sloping floors of our adopted armchair corner, while the Paul Pry cheekily embraces opportunistic marketing by inviting in other casualties of the festival's ticketing policy. A closing half of Gloucester Dockside Dark rounds off an outing like no other - our festival intentions may have been thwarted but we still made the most of our Worcester excursion.
Posted by West Midlands Exploration at 9:38 am No comments: