Thursday 16th August 2012 and something was stirring down at Worcester Racecourse. Could this something be the 13th Worcester Beer, Cider and Perry Festival by any chance? Nick and I were on hand to find out, so here are some pictorial highlights from the event itself and our more general pubcrawl around Worcester City Centre... 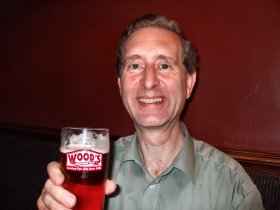 - Wild Shropshire in Wetherspoons: Nick looks forward to some Woods ale
and a curry feast in the Postal Order on Foregate Street - 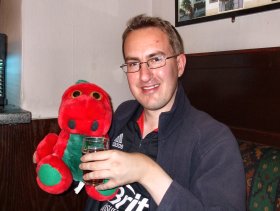 - The Dragon: a cuddly chum offers his thoughts on Baron Coubertin's
Ambrosia from West Berkshire - 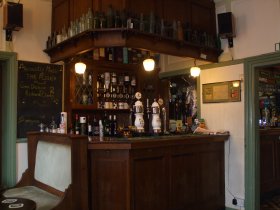 - The Plough: I really liked the timeless appeal of this place with its green
bottle collection, parlour furniture and a sample of St. Udley Mild (Wetheroak)
that might be an acquired taste, plus you could hear the strains of
Henry Blofeld with Test Match Special on the radio - 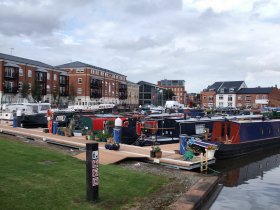 - Diglis Basin: Some waterways walking takes us from Sidbury Lock to Diglis Basin,
where the Anchor is a notable canalside inn with plenty of charm.
We continue past the Diglis Locks to join the River Severn just as
Worcester Cathedral chimes 5 o'clock - 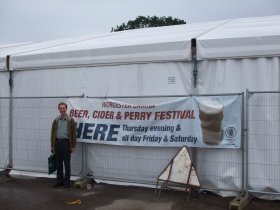 - Arriving with Anticipation: a quick shot outside the big tent before we head in
to sample the ales. Amongst those on offer were Hot Dog Chilli Stout, Ginger Stout, Martha's Mild, Trout Tickler and Ginger Bear, although pride of place went to
the Baltic Traders Imperial Stout at 10.5%, wowsers! - 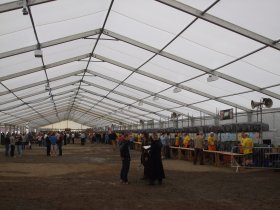 - Massive Marquee: the view inside the tent, which was suitably large
enough to include space for over 200 real ales plus a hundred or more
ciders and perries. The bare earth floor made staying on your feet
an interesting challenge in the muddiest patches - 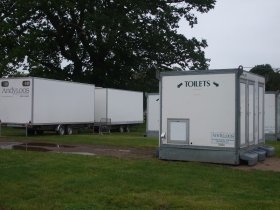 - Andyloos: The festival had even prepared for Mr D9 but naming the toilets
in his honour was possibly taking things a little too far! - 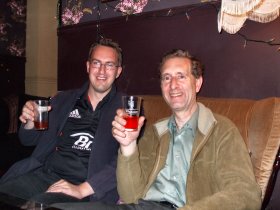 - And finally: a closing swig of strawberry cider as the fairy lights,
lampshades and PacMan games of the Firefly give the evening
a curious but nonetheless fitting epitaph. Cheers!! -
Posted by West Midlands Exploration at 8:21 pm No comments:

The patchwork quilt of my local explorations has gradually built up over the years as further layers get sewn into place. The latest additions came courtesy of a rare Monday off that saw me hunting for bits of material in Walsall and Sandwell...

Pleck: My morning starts at Bescot, glimpsing the busy sidings and trying hard to ignore the concrete totality of the M6 motorway. The Banks's Stadium (home to Walsall FC) is gearing up for the start of the new football season, and then I investigate down Montfort Road for my first ever encounter with Pleck Park. This pocket of open space is wedged in between the motorway and a railway line but offers a bowling green, tennis courts and some welcome sanctuary. 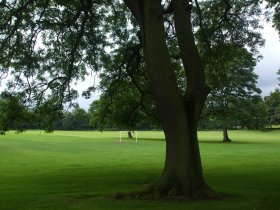 Palfrey: backtracking past Morrison's and the Broadway West Playing Fields, I make my way along Milton Street to find the Charles Napier, a traditional corner alehouse on the junction with Lord Street. Palfrey Park is a favourite of mine that appears to have had a makeover lately, hence the appearance of a new ranger hut (another example of 'floorboard' architecture) and a wiry sculpture of a horse. I really enjoy investigating some of the terraced backstreets as my trail weaves close to Caldmore. 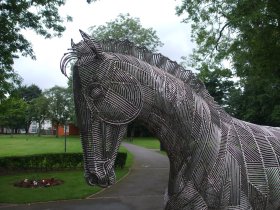 Delves: next up is a shuffle along Delves Road, noting Walsall Rugby Club and parts of the university campus. This appears to be quite a nice residential area and that impression continues with Delves Green Road and Delves Crescent. The Tiger is a familiar target on Walstead Road before I take a stroll across Delves Green itself, a grassy area that leads me across into Sandwell territory. 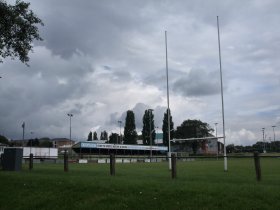 Yew Tree: a useful follow-up to my visit to the estate with Mr D9 earlier this year. I take care to note the former location of the Fir Tree Primary Schools, the buildings having been flattened with the site awaiting a new use. Redwood Road is the heart of the community, offering the local shops, a youth and community service, a walk-in health centre and the Annunciation of Our Lady Church - there also used to a branch library along here somewhere, but the mobile library van is in attendance today by way of current provision. 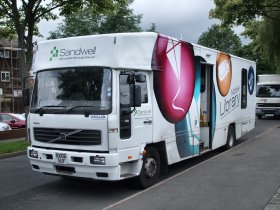 Canals: a little path alongside Cypress Gardens brings me onto the Rushall Canal at Shustoke Bridge, from where I proceed to Rushall Junction with the occasional passing nod to canalside anglers. Hill Farm and Biddlestone Bridges get their doses of photographic attention, and at the junction I bear right along the Tame Valley Canal. It has to be said that this is not my favourite stretch of waterway, it being straight and rather featureless except for the constant drone of the accompanying M6. There are some views of Ray Hall Reclamation Works and the River Tame to be had, although things do liven up with the aqueducts over the M5 and then above Tame Bridge Railway Station. 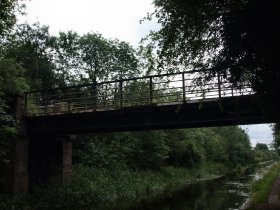 Charlemont Farm: Just after the railway aqueduct, I shimmy down the embankment onto Beacon View Road for my first pictorial foray into Charlemont Farm. Served by the 405 and 646 bus routes, the estate has intrigued me for some time and anticipation was building as I ventured further in. My eye was soon caught by the sad presence of the Mill, a derelict pub on the corner of Wyndmill Crescent that had most of its roof missing. The local shops wouldn't win any awards for aesthetics either, and then comes the Spinney, a pub which is still open but didn't look overly inviting. Climbing up to Charlemont Road, I head left through to Wigmore Farm where the surroundings are transformed into a quiet country lane with grazing ponies and the Sandwell Valley Riding Centre. 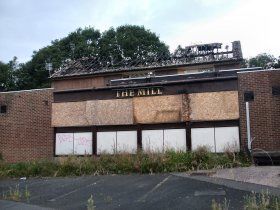 Hall End: with aching feet and glistening forehead I press onwards for the final leg to Black Lake. Heath Lane presents the front gates of West Bromwich Cemetery as I turn into Vicarage Road, then there is a sequence of pubs to keep me occupied. The Queens Head is a good find but the Nags Head looks like it might have got converted into something else - star discovery however is the Hall End Tavern, now operating under its colloquial name as the Rampa Tampa (or the Rampa for short). All three are new additions to my archive and they provide a sweet flourish to carry me wearily onto my tram just as a sharp shower threatens to set in. 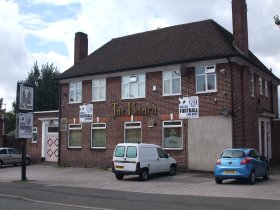 Satisified with my exertions (although somewhat tired), I make it home to reflect on my latest bit of handiwork. It had been some effort linking Bescot and Black Lake with many intricate twists and turns, but the needle and thread had definitely been put to excellent use and that patchwork quilt is all the more complete because of it...
Posted by West Midlands Exploration at 9:32 pm No comments:

As another month ticks by, its time once again to put the West Midlands Exploration Flickr photostream under the microscope and see what manner of updates I managed to cultivate in July...

Sprouting forth quite considerably was WME Staffordshire, building on June's initial germinations with a real burst of growth. The bus stops and stations made their presence felt as Codsall terminus and the former Green Bus Service depot at Landywood both featured, whilst the Staffordshire & Worcestershire Canal arrived on the scene with some views from Awbridge. However, the most dominant strain has to be the Shropshire Union Canal which came through strongly with pictures from Norbury Junction, Gnosall, Brewood and Wheaton Aston.

Focusing in a little closer, it is possible to detect activity from some of the photostream's other subcultures, including those that had gone a bit quiet recently. Take WME Birmingham for example, putting on a spurt thanks to gains from the Worcester & Birmingham Canal (Edgbaston Tunnel), the Tame Valley Canal (Perry Barr Lock No. 2) and Sutton Coldfield Station (the elegant station frontage). WME Dudley was equally keen not to be forgotten so it coughed up a shot or two from Oldswinford (the Retreat bistro) and Stourbridge Town (a look at the Dodger).

Intense magnification reveals further species that need to be duly noted, hence from WME Sandwell there is a Guns Village Metro Stop scene and a glimpse of the Railway Inn from Oldbury. Scrape away at individual cell level and a tiny fragment of the number 13 bus at Prologis Park can just be spotted clawing its way onto WME Coventry, then zooming back out a little shows us that WME Solihull has been active with evidence of Marston Green Station (footbridge steps and a Class 323 train) alongside a brace of 169 buses posed at Solihull Station. In conclusion, my investigations show that July was a more progressive experiment than others of late, so if I maintain a similar apparatus and method for August then we could be looking at some suitably scientific signals of success...
Posted by West Midlands Exploration at 9:55 pm No comments: