Back in the early part of last year I put a free Saturday to good use with a local walk discovering the various communities of Cradley, an outing that sampled the very essence of the Black Country. Fast forward to Saturday 19th November 2011 and with a few hours going spare I decided to embark upon a similar theme. The result was a wander from Rowley Regis to Cradley Heath that included a bit of canal exploration for good measure...

* We pick up the tale at Smethwick Galton Bridge where my connection to Rowley Regis is provided by one of the new fleet of Class 172 trains now operating on the Stourbridge Line. I must admit I had quite a soft spot for the old Class 150 Sprinters that previously worked the route but the Class 172s are undoubtedly a big improvement with a modern train interior, scrolling displays, automatic voiceover announcements and a much smoother ride quality.

* Alighting at Rowley I head straight down Nimmings Road for a quick photo of the Clock pub, a distinctive landmark on the corner of Masters Lane. Crossing Long Lane I venture around the Olive Lane estate, an area I first encountered years ago on the old 610 Travel Merry Hill minibus route. Features here include the Victoria pub and Olive Hill Primary School before I renew my acquaintance with Long Lane Library.

* Quinton is an area effectively split into two, half in Birmingham and half in Dudley. The latter portion gets my attention today with the Stag & Three Horseshoes especially prominent overlooking the busy A458 roundabout. There are plenty of local shops here along with a Suzuki StreetBike dealership and the Lapal scout base.

* Wandering along Kent Road I branch off down an intriguing track which leads me into Leasowes Park, a pleasingly natural area of open space that comprises woodland, pools and the Halesowen Golf Club. A little clearing provides a nice spot for a well-earned lunch and then I enjoy following the streams of High Cascade and admiring the autumnal colours with an emphasis on deep shades of burnished orange.

* Emerging by the warden centre I happen across the remains of the Dudley No. 2 Canal. The Lapal Canal Trust are working to bring about the restoration of the waterway, which once continued beyond it's current Hawne Basin terminus to go through the Lapal Tunnel and onwards to Weoley Castle and Selly Oak. The section flanking the park is partly in water and links through to Manor Way but reaches a dead end at Mucklow Hill.

* Having found the disconnected part of the canal, I'm now keen to track down the section that is still part of the current waterways network. I pick up the trail down the side of the Mucklow Hill Trading Estate thanks to a somewhat overgrown public footpath that provides tantalising glimpses of Hawne Basin. I join the towpath proper at Coombes Bridge and then continue amongst industrial surroundings to find the south-eastern portal of Gorsty Hill Tunnel.

* There is no foot access through the tunnel so I have to go the overground route, climbing up a gravel drive and then a set of steps to resurface in Coombeswood opposite the Lighthouse, a Brains pub I remember once visiting with Roger. Station Road has a curious tunnel airshaft structure that Andy pointed out to me earlier this year, and I can also get photos of the Boat pub as I descend towards Old Hill.

* Old Hill Station is next for some exploration treatment as I linger a while hoping for a bonus Class 172 photo. The 14:06 to Stratford happily obliges and I can then continue down more of Station Road (past the Horseshoe and the Crown) before spotting a chapel being demolished on Halesowen Road. Old Hill is a place I haven't got many pictures of so I set about putting that right with shots of the Spring Meadow and Riddins Tavern pubs, the latter being hidden away somewhat behind the local primary school off Lawrence Lane.

* The final leg of my walk takes me into Cradley Heath where I'm pleased to get a shot of the town's Carnegie library, a fascinating building that first opened in 1909. Further down the High Street is St Luke's Church followed by the new(ish) Tesco supermarket that has really transformed the centre here. Saying that, it's good to see that a number of independent shops appear to be surviving here and a real sense of community is still very much in evidence as people are very happy to stop and chat in the street. Cradley Heath Station beckons with the promise of more Class 172 action, and with the 14:56 departure I set off for home delighted with my latest slice of Black Country memories.
Posted by West Midlands Exploration at 11:51 am No comments:

Friday 11th November and the latest round of hub happenings saw Andy and myself undergoing a Walsall workout complete with a minor incursion across into Staffordshire...

TAME BRIDGE: The morning saw me battling railway chaos as a signalling meltdown near Wolverhampton created delays and displacement across the local network. In truth I was probably one of the luckier passengers in that I wasn't in any kind of hurry and the trains didn't fall too badly, eventually delivering me to Tame Bridge Parkway so that I could have a brief walk along the Tame Valley Canal and a mooch into Charlemont Farm. I then enjoyed a blast-from-the-past ride on the 405, a route I hadn't been on in years that gave me food for thought in terms of exploring Yew Tree, Bescot and Palfrey in future. 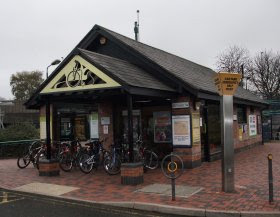 - Tame Bridge Station -
CALDMORE: Meeting Andy at Bradford Place we decide to start our tour in Caldmore courtesy of a mercifully short ride on the 404 as I try to avoid the D9 power steering. The Crown and Anchor has sadly closed but we can try the White Lion, sitting towards the 'shallow end' of the bar with our halves of Adnam's Southwold Bitter as the 'Hi-Viz Hub' is christened. Further up Sandwell Street is the Dog & Partridge, curiously dark as if trying to save on the leccie bills. 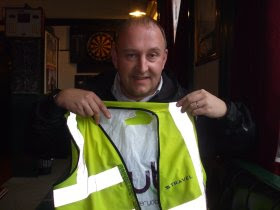 - The Hi-Viz Hub - you have been warned! -
CHUCKERY: The backstreet tour continues down into the Chuckery as we encounter the Duke of York on Lumley Road and a novelty "Gone to Mosque" sign in a barbershop window (makes a change from 'Closed for Lunch'). We pass the old Crabtrees factory site to sample the Spring Cottage on Paddock Lane, a decent find with a bit of character. It's then over to Mr Lunn Esq to direct some arboretum orienteering trying to find old toilet blocks and Bundy clocks - the flagship park is partway through a major restoration programme which should hopefully return the facility to its former glory. 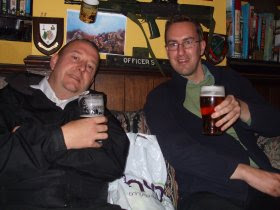 - Military Memorabilia in the Junction -
CHASETOWN: Did I mention Staffordshire earlier? A well-placed and packed out 10 is on hand to take us further afield with a trundle up through Shelfield, Brownhills and Ogley Hay. We were half tempted to try Burntwood but didn't quite judge the bus stop correctly, hence ending up further round the terminal loop than originally anticipated. Andy's creaking bladder necessitates some marathon training down Chasetown High Street where his concerns are alleviated by the Crown. Now we're here we might as well make the most of it so the Junction and the Uxbridge Arms are included for good measure; the Uxbridge served a cracking pint of Newark Castle Brown Ale (a not-too-disguised play on words from the Springhead Brewery) but the Junction had the edge for a fascinating military corner with army chests and forces helmets, a highly appropriate setting for Armistice Day. 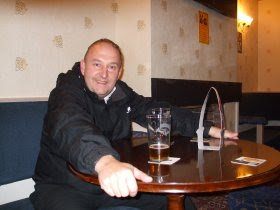 - A suitably sized steering wheel in the Swan -
BROWNHILLS: A quick link back on the 10 returns us to Brownhills where the Swan is high on the agenda, the pub having recently reopened and boasting some Holden's Golden Glow. A wait between buses gives a window of opportunity to squeak in the Shoulder of Mutton, and we finish off the afternoon in Walsall with a final half in the shadow of the new Tesco supermarket.

Time drifts relentlessly on as I find myself assessing October's contribution to the WME cause, whereby exactly 50 photos were released onto my Flickr photostream. Let's see what that half century of images had in store for us...

As with September my primary focus was on building up my Second City selections as Birmingham took most of the limelight. Re-emerging this time were the likes of Acocks Green Station, Cannon Hill Park and a bit more content from Bartley Green (including a few bus shots). My Brum collection now spans 29 sets and is now starting to take some of the shape that the old Fotopic gallery had - as ever though there is always a long way to go.

Elsewhere, Dudley was next in line for a bit of attention as I added a very slight but much-needed dose of flesh to the initial bare bones that had poked through thus far. WME Dudley therefore now comprises 11 sets and 22 photos - still borderline skeletal it has to be said but Brierley Hill, Oldswinford, Coseley Station and Sedgley at least gives me something to work with.

If Dudley is a toddler trying to find its feet then Sandwell and Coventry have only just made it out of the womb. Great Bridge (the Limerick pub as was) and Princes End (the shopping precinct and the former Lagoon) gives Sandwell 4 starter pictures, whilst Coventry is off the mark with a solitary shot of a Tile Hill flower shop. This is all rather embryonic at the moment and will require some nurturing and parenting skills as I try to manage my expanding brood. Birmingham, Dudley, Sandwell and Coventry should all be receiving some affection heading into November whilst behind the scenes Solihull and Staffordshire are aiming to become the next additions to the family...

Posted by West Midlands Exploration at 6:42 pm No comments: