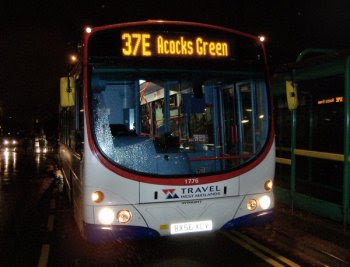 Last Saturday heralded the first Rog and Woody trip of the new year, as we set off in search of former Boon locations in addition to our usual bus adventures - here are the highlights..

Well, I have to say that wasn't bad for starters. The outing took us into Sandwell, Birmingham, Solihull and Coventry, provided good pubs, decent grub and some fine photo opportunities. More of the same on our future outings and we could be in for a vintage year.

Posted by Paulwulf at 8:37 am No comments:

Good news - the WME updates are off and running for 2008! Finding a bit of spare time this morning, I have moved a few photos onto WME Wolverhampton and WME Birmingham - only a handful of photos but its nice to get the ball rolling again. I'm quite pleased actually as the updates provide some intriguing and very welcome additions to their host collections.

On WME Wolves, Exploring Tettenhall gets two views of Tettenhall Pool, a local facility and landmark that demands a WME presence. The Wolverhampton pub count is also boosted by the appearance on Exploring Penn Fields of the Stamford Arms, a backstreet local that was a surprise discovery during a lunchtime walk.

To WME Birmingham, and some progress on Exploring Stockland Green. I've added a second view of Brookvale Park, but perhaps more notable is the view of the old Stockland pub from April 2005, a photo that has some archive value since the pub became an oriental restaurant.

Finally, I'm very keen to use the early part of 2008 to pay some attention to collections that haven't been updated much since they were first created. A case in point would be Butlers Lane Station - the collection was created with 2 starter photos back in December 2005, and nothing has happened since - until today that is. Yes, a solitary new addition makes all the difference, so lets hope that the station sign photo added here is the start of improving collections across all the WME galleries.
Posted by Paulwulf at 11:44 am No comments:

I hate January. I hate rain. And yes, I hate gales too. I seem to be going through a phase where whenever I have a day off and try to go exploring, a monsoon arrives and the trip becomes a washout. I suppose I should expect nothing less at this time of year, but I can't help finding it all incredibly annoying.

Anyway, I'll try looking on the bright side. I did do some good exploring today, well at least before the heavens opened. I ventured out into Staffordshire and landed up in Eccleshall, a fine little country town with some considerable charm and a generous selection of pubs. It was a shame that the rain set in the instant I stepped off the 432 bus, but I did manage a few photos before the downpours became torrential, mainly focusing on those pubs I mentioned - namely The George, The Bell and The Royal Oak. I suppose if you can get absolutely drenched, half frozen and have your camera playing up on you, and still come away liking a place then thats got to be a good sign - so Eccleshall, you might have escaped the full Paul treatment so far but I will be back.

Still on the topic of frustration, things have gone a little quiet on the old WME front this last week or so. I do have photos I want to move around, its just a case of getting round to actually shifting them - hopefully the first proper WME update of 2008 is just around the corner. Weather permitting that is!
Posted by Paulwulf at 8:27 pm 1 comment:

As we hurtle headlong into 2008, its time to pause and reflect on what I got up to in 2007 with the WME Blogspot Review of the Year. Let's take a month by month look at the highlights from the past 12 months...

January: The year started with a couple of local walks, firstly around Parkfields and Woodcross, then heading across to Walsall for a look at Bentley and Darlaston. There was also time for a Birmingham local, exploring Small Heath Station, the old 28 route and venturing into Shard End and Kingshurst.

February: A quiet month really. Rog, Woody and I descended on Warwickshire, calling at Rugby, Leamington and Stratford - Rog wasn't too well, and Woody ended up in a pub kitchen when looking for the toilet! On the solo outings front, I particularly enjoyed a Friday visit starting at Aldridge with some bus photos, then heading along the Daw End Branch Canal for lunch at Clayhanger.

March: A month of big explorations, starting with the London trip, notable for my first ever ride on the tube and a visit to Jack the Ripper territory for a pint in the Ten Bells at Whitechapel. Things were a bit quieter when I visited Pattingham to take a variety of village photos and explore the 517 route. March is of course Rail Rover month, and the tradition was maintained in style - highlights included Craven Arms and Ruabon on a perfect Tuesday adventure, with Hinckley, Nantwich and Whitchurch also featuring prominently.

April: A couple of trips with Rog and Woody, starting with a tour around Stafford and Newport, and a group photo in the pub. It was also time to say goodbye to Chase, that fine local bus operator, as we joined in the final day commemorations - the day included visits to the Chase Depot and Delta Way in Cannock, but my personal highlight was our ride on the 381 from Lichfield to Walsall on what turned out to be the last official route working by a Chase vehicle.

May: Come May and it was carnival time down at Kinver, giving Rog, Woody and myself the chance to indulge in our own sideshow entertainment in the form of the bag wars down on the canal - Rog as usual came off worst! May also provided a wonderful day watching cricket at Worcester, with the added bonus of a look at Cripplegate Park and the Worcester & Birmingham Canal.

June: Entering summer with an absolute classic - out and about in sunny Staffordshire exploring Burntwood, Chasetown and Norton Canes and riding on routes such as the 394 and 396. Further early summer indulgence came in the form of a walk along the canal at Brewood, and a quick pint in the Bridge pub.

July: Time for a proper summer holiday, and this year's destination was Great Yarmouth, exploring the local bus network and calling in at Cromer, Sheringham and Aldeburgh. Rog was in attendance for a trip across West Bromwich way, finishing with a few pubs around Gospel Oak and Rocket Pool - there was even a surprise meeting with Santa!

August: Venturing once more into Staffordshire, this time with a visit to Uttoxeter, calling in on Penkridge on the way home. More locally, I enjoyed a walk around Northway and the Straits, and went on the trail of Green Bus photos in Wolverhampton - no bus was safe!

September: Moving into autumn with a Sandwell Special exploring Smethwick Locks, Cradley Heath and Haden Hill Park. There was also time for one of the highlights of the year - a visit to Netherton with Rog, complete with a pint in Ma Pardoe's.

October: What a month, jam packed full of fantastic exploration! Kicking off with a visit to Old Oscott and Walsall Arboretum, my trips took me to Telford (Dawley and Leegomery), Coventry (Canley and Keresley) and Birmingham (Hall Green), not to mention the Very Perry trip. On the Rog front, there was an outing to Handsworth and Hamstead, where we watched the cricket in the pub, and finally we had The Delph trip, supping pints and playing pool on a Friday afternoon - perfection!

November: And the outings kept coming. Rog nearly crippled himself during our Hagley and Pedmore walk, I braved Birmingham once more for a look around Kings Heath and West Heath, and I also returned to Sandwell to renew my acquaintance with Great Bridge and Tipton. I think Rog still hasn't fully recovered even now!

December: Ending the year in style with a trip to Evesham and Pershore with Rog and Woody, whereby Rog became a puddle-magnet and I finally got a look at Evesham Station. My local adventures took me to Perry Hall, Bradmore and Springfield, and there was also a nice bonus look at the Prince of Wales pub in Woodsetton.

So there you have it, and on reflection, 2007 wasn't such a bad year at all. Plenty of outings, lots of great memories, a fair few photos - thinking back on it all has certainly given me the appetite to get out there and see what 2008 has in store.
Posted by Paulwulf at 9:45 am No comments:

So it is that Christmas is over and done with for another year, and we now enter that bleak part of the year where the weather is useless and exploration becomes a matter of survival whilst trying to tease out what few photos are possible in the all-encompassing gloom - yes folks, welcome to January.

January has never been a kind month for outings in previous years - I tend to end up with grey, miserable days when I'd much prefer bright wintry sun or even a bit of snow. It all gets a bit depressing really, so my thoughts usually turn to staying indoors and trying to get something moving on the old WME front, although this can often prove even more frustrating than huddling for warmth as the bus I'd hoped to get a photo of drives off into the distance.

2008 looks like being no exception, so I've already begun WME work in the vain hope of maintaining my sanity until spring arrives. Before Christmas, I vaguely mentioned my plans to make a big effort come the new year to get some new content onto the galleries. I don't want to herald anything just yet, but I have put a few tentative test photos out on WME1 that will hopefully translate pretty quickly into a little smattering of updates.

Hopefully this should be just the start of a concerted effort to provide photos more regularly for all the WME galleries, so there is light at the end of the tunnel. With that, and despite my earlier mutterings, I will bid you a Happy New Year, and lets hope for some nice sunny or snowy days to kick off a year filled with fantastic explorations.
Posted by Paulwulf at 8:32 pm No comments: