Friday 25th October 2013 was designated as the day when the Hub Marketing cohort would descend upon Coventry for our annual survey of the city's hubs, pubs and other random discoveries. Brace yourselves for cats, quiffs and... cups of tea?!? 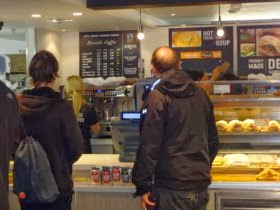 Coffee Concentration: Early starts often mean that the Chairman has to dose up on coffee before he is fully primed for some intense hub happenings. On this occasion he was still too sleepy to notice that his bald spot was in full view during New Street's morning rush. 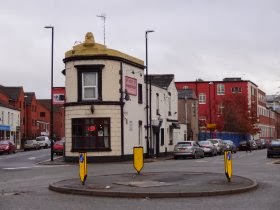 Site of the Coventry Closet: Arriving in Coventry just before 9am, the Secretary immediately rummages about in those sleeves of his and plucks out Cheylesmore Manor, a medieval structure with royal connections that nowadays houses Coventry's Registry Office. Just for good measure, he then navigates to the site of an old closet that once stood on the junction of Raglan Street and Lower Ford Street (outside the Forester's pub) - thankfully the Chairman's coffee hadn't caught up with him yet so the urge to reclaim history was resisted! 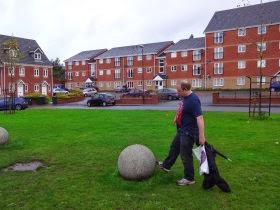 A Highfield Road kickabout: Plotting a course through Hillfields, members can then pay homage to Highfield Road, the historic football ground home of Coventry City FC. The area has been redeveloped into the Signet Square housing complex but a patch of green space still marks the location of the playing surface, prompting the Chairman to imagine himself as Brian Kilcline strutting his stuff for the Sky Blues.

Mouldy Old Dough: Musical memories are next on the agenda as we cross the Walsgrave Road, offering a nod to Stoke Library en route. It was in the front room of a house in Stoke that Lieutenant Pigeon recorded their 1972 #1 hit 'Mouldy Old Dough' with Hilda Woodward providing some of the piano melody. We keep our eyes peeled for any sign of the specific residence in question as the Chairman summons up the tune itself courtesy of his mobile ringtone. 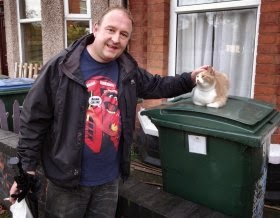 Getting Down with the Coventry Cats: Perhaps it was the prospect of pigeon that meant the cats were out in force to greet us as we made our way towards Stoke Green. True to form, Mr D9 was always willing to have a little stroke whenever necessary and even got to grips with a teddy bear that just so happened to be sitting on a garden wall. Quite what the moggies thought of his muppet t-shirt was another matter, but we emerged unscathed in readiness for breakfast at a cafe around the back of the Empress Arcade off Binley Road. 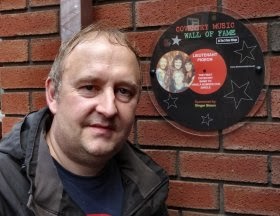 Music Wall of Fame: Back on Walsgrave Road, one of the day's top finds was the Coventry Music Wall of Fame, comprising several mounted discs paying tribute to the city's musical heritage. Among those to be featured are two tone luminaries such as The Specials and The Selecter alongside vocalists including Frank Ifield and Vince Hill - a genuinely fascinating and imaginative way to present community history. 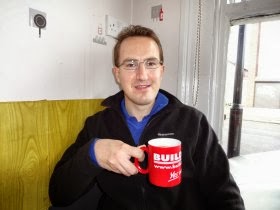 A Coventry Cuppa: Weaving our way towards Stoke Heath, we are disappointed to be thwarted by the Rose & Woodbine once more - at least we found the pub this year but it didn't open until 4pm. A consolation cuppa is required courtesy of Pat's Cafe, complete with a proper builder's mug! 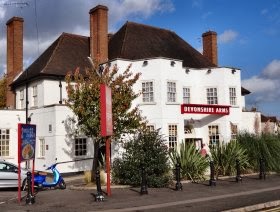 Devonshire Discount: The tea was outnumbering the beer by this stage so it was time to sample some of the pubs in the vicinity of Walsgrave Road. The Rose & Crown and the Walsgrave carvery both registered, although top honours went to the Devonshire on Sewall Highway where the Secretary swooped in for a discounted round to leave poor old D9 with a distinctly furrowed brow. D9 Destroyer's double 4: After an encounter with a heavily guarded Painted Lady (where mention of a 'Fast Response Unit' somehow didn't stretch to the bar), our Chairman gets his revenge by mastering the dartboard at the Millpool. Although WME Whirlwind took the first leg, the Destroyer fought back for a 2-1 victory, no doubt powered by some Everard's Pumpkin Ale. 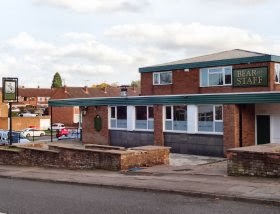 Bear & Staff, Ernesford Grange: By this stage we were in need of some dubious pub architecture and thankfully the Ernesford Grange estate delivered a double helping. Both the Bear & Staff and the New Tiger Moth had the kind of flat-roofed appearance that has Mr D9 drooling (even if the Guinness prices didn't), whilst the Charterhouse on Terry Road replied with elements of 'Brewer's Tudor' as we return via Stoke Aldermoor. 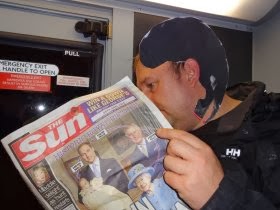 Tribute Quiff takes a break: A Gosford gander and a Foresters flirtation precede a Rocket round-up as we swoop into Coventry, whereby the Ron West tribute quiff (lovingly crafted out of the finest cardboard) is in full cry on our bus back to the railway station. The 19:22 train provides our connection to Sandwell & Dudley where it is thence adieu - until next time...
Posted by West Midlands Exploration at 9:46 pm No comments:

Saturday 5th October saw Nick and myself converging upon Solihull, where the town's 15th CAMRA beer festival was underway at the British Legion club off Union Road. Several intriguing ales were sampled in preparation for an afternoon of Shirley exploration topped off with a special pub visit in Birmingham... 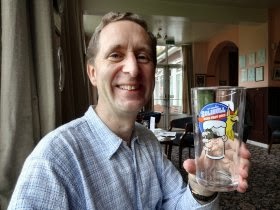 - Armed for Ale Action -
Meeting at Solihull Station at precisely 11:23, we made our way to the British Legion in advance of the festival opening at 12 midday. I hadn't visited the Solihull festival before but found it to be a relaxed, compact event with about 40 or so ales including good representation from the local Whitworth and Shed breweries. £10 entry covers programme, pint glass and  beer tokens and we were all set for an imbibing session. 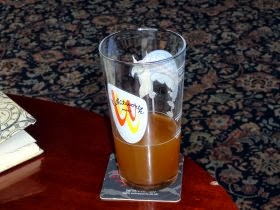 - Vlaamse Flemish-style Wheat Beer -
True to form, Nick homed in on the beers that the programme wisely labelled "to be treated with caution" so the Green Hop IPA, Salopian Boomerang and the Elland 1872 Porter all needed to be taste-tested. Among my choices were Castro's Chalice (the latest in Holdens' World Leaders series), a Long Itch Backscratcher and some of Shed's rather moreish Executioner's Porter. However, the ales that made the greatest impression on me were the Vlaamse Wheat Beer (intentionally cloudy to the extent it looked like liquefied rust but had a lot of bite) and the Black Voodoo with its heady mix of chocolate, orange and vanilla. Soon enough it was time to nominate our beer of the festival, with Nick painfully prevaricating until his predilection for dark ales won out meaning Black Voodoo secured a clean sweep from the Chip Foundation contingent. 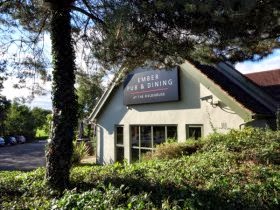 - The Fieldhouse -
Festival favourites thus voted for, we set out into the wilds of Solihull by taking the number 5 bus down Widney Lane to Monkspath Hall roundabout. There we found the Fieldhouse, a rather corporate Ember establishment where we did battle with a War Lord whilst casting critical glances over a somewhat superior food menu. 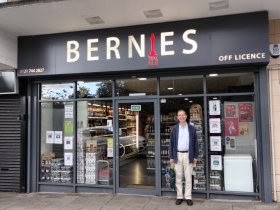 - Beaming at Bernies -
Another blast on the 5 then brings us to Cranmore Boulevard, home of Bernie's real ale off licence. The bottled beer range here is something to behold and makes coming to a swift decision nigh on impossible. Eventually we emerge loaded with various bottles as we proceed firstly to the Woodman's Rest (another cog in the Ember chain and a place where chicken schnitzel is considered a pub classic) followed by the Red Lion where the cheese and onion cobs are much more our kind of fayre. 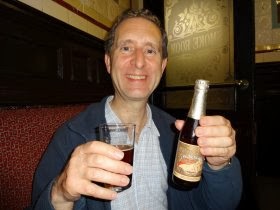 - Posed with a Peach in the Woodman -
From Shirley we take the number 6 bus into the heart of Birmingham, getting well acquainted with Stratford Road bottlenecks in the process (Springfield, Sparkhill and Sparkbrook all proving tricky to navigate inbound). However, it was all made worthwhile once we set foot in The Woodman opposite the former Curzon Street rail terminal. The pub has faced a battle for its very survival in recent years, becoming effectively marooned in Eastside wasteland, but has now been lovingly restored to bring its late Victorian splendour very much back to life. The Smoke Room behind the bar was a particular favourite with its Minton tiles and cosy ambience, a perfect setting for a half of Count Duckula and a look at Nick's Belgian bottles. With that, another successful expedition is completed - I'd definitely return to Solihull festival next year if the chance arises, and I hope to be back at the Woodman even sooner!
Posted by West Midlands Exploration at 5:44 pm No comments:

With a cough and a splutter, the WME photo-engine has been revved up once more in readiness for some autumnal additions. Let's see what September's driving had to deliver...

In charge of the steering wheel this time around is WME Worcestershire, taking us on an important excursion to Worcester itself - here we now have the Bridge pub, the Severn View Hotel, the Olde Talbot and a view across the racecourse, not forgetting a snapshot of George Street Bridge on the Worcester & Birmingham Canal. Also travelling upfront and getting into gear is WME Shropshire, where Much Wenlock has made its long-awaited photostream appearance care of some Bull Ring cottages and a peek along medieval Sheinton Street.

Very much vying for attention in the rear of the car are a motley bunch of lively passengers. WME Sandwell brings forth Watery Lane and Waterfall Lane Bridges, plus a photo of the old plaque at Ethelfleda Gardens in Wednesbury, whilst WME Dudley summons up a shot of the entrance board at Halesowen Town Football Club. Challenging these for the title of backseat driver are WME Walsall (St Matthew's Church in the town centre followed by the Brickmakers Arms at Walsall Wood) and WME Wolverhampton (a street scene from Yew Tree Lane and an archive snap of Wards Bridge).WME Warwickshire asks "are we nearly there yet" with a view of Palmer's Farm in Wilmcote while WME Staffordshire rummages in the boot for the X30 Alton Towers bus at Uttoxeter Station.

Finally but by no means least is Exploration Extra, which has been struggling to release the handbrake of late. Now refuelled just a little, there is an eclectic selection covering West Yorkshire (a train at Huddersfield), Devon (the signal box at Topsham), Wales (a bus at Rhyl) plus London (Kennington Tube Station, the Trafalgar pub at Merton and the 152 route at Colliers Wood). That completes our motoring medley for this month, and we await to see what gets loaded up for which destinations in October...
Posted by West Midlands Exploration at 7:29 am No comments: