With the turkey and mince pies just about digested, it's time to cast a post-Christmas glance in the direction of the West Midlands Exploration Flickr photostream to see what may or may not have been occurring of late. In truth there is not a lot to report, even allowing for my typically pedestrian rate of progress, and I can't really blame the festivities for the lack of update action...

Nonetheless, there have been a few bits and pieces that have beaten the clock as it ticks down towards 2014. Top of the tree this time around is WME Birmingham, which jousts with the usual yuletide angels by providing views from Edgbaston (a cricket ground shot, two scenes from Constance Road plus a glimpse of the Ivy Bush pub), Rubery (the Morrisons supermarket at Great Park) and Blake Street Station. WME Dudley has also been forthcoming with the presents this year, hence we have two buses (the 265 at Merry Hill and the 298 at Stourbridge) plus a peek at the Sainsbury's store on Withymoor village.

Less generous but still registering their attendance at the office party are WME Staffordshire (a look at Penkridge's station house, not forgetting the historic Essex Bridge near Shugborough Hall), WME Sandwell (the wreck that is the Forresters Arms off Spon Lane, West Bromwich) and WME Coventry (the city's railway station frontage with added taxis). Also on the guestlist are WME Wolverhampton, sporting a fetching shade of old gold courtesy of Molineux Stadium, and the oft-forgotten WME Solihull where Cheswick Green's local pub (The Saxon) jostles for a bit of attention.

Of course, Christmas is also the time of year for meeting up again with distant friends and relations, and to that end we have a slight Welsh invasion to report from Exploration Extra. A 111 bus from Mold has tiptoed into view whilst Wrexham makes its photostream debut courtesy of the town's football ground and bus station. With that it's pretty much time to dismantle the tree and box up the decorations for another year, and I shall close with a resolution to try and be more forthcoming with the updates in 2014...
Posted by West Midlands Exploration at 8:39 pm No comments:

Christmas Hubs with a Helping of Calendars

Christmas is fast approaching and the festive season brings with it the unveiling of the annual WME calendars, my own little way of saying thank you to those wonderful (some would say misguided) individuals who spend the rest of the year adopting various silly poses in the name of exploration... 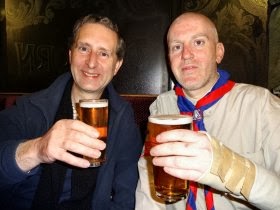 - Scouting for Bathams -
A note first for a special presentation that occurred in wet and windy Wollaston on the evening of Wednesday 18th December. Nickolenko and I had braved the elements in order to meet up with Mr SBI who was wearing scout regalia especially for this momentous occasion. The Unicorn pub was the setting as Roger's calendar was duly handed over, accompanied by some excellent Bathams Bitter. Here we see Messrs Pubalotovich and Chance savouring the ale, whilst elsewhere that evening Nick did a very passable impression of Mary Poppins in almost getting blown away frantically clutching a miscreant umbrella. 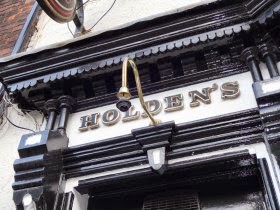 - The Wheatsheaf -
Friday 20th December is the final Hub Marketing meeting of the year, a yuletide yomp that would cover the nether regions of Carters Green, Hateley Heath and Wednesbury. Our rendezvous is at the Wheatsheaf, a classic Holdens boozer that seems like a highly appropriate place to discuss the Hub Marketing Awards 2013. Our illustrious Chairman is crowned as the Discount of the Year recipient (but also copped for the most expensive round of the last 12 months), whilst the Secretary is recognised for his sleeve successes. The New Inns at Birchills is 'awarded' the Pub of the Year title by virtue of its lasting canine impressions, and Charles Elgar Pemberton Rowbottom III gets the Lifetime Achievement accolade. 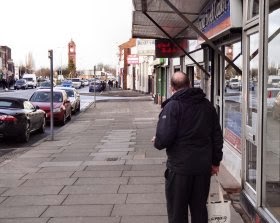 - The Bald Spot Gets Clocked -
The prize for the best bald spot photograph was a tough decision because there were so many to choose from, although there was a late submission within the vicinity of Carters Green clock. 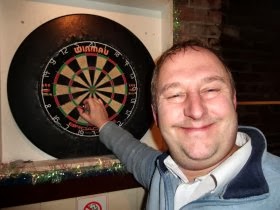 - The Chairman takes the lead -
Counting back over the year's pub games exploits, we realised that the Secretary and the Chairman were currently tied level at 6 victories each. This meant that today's battles would decide the 2013 title, whereby D9 got off to a flying (and somewhat smug) start with some darts success at the Sow & Pigs. 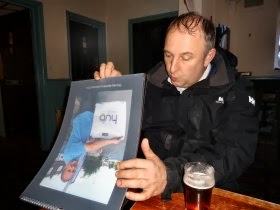 - Calendar Considerations -
Moving round towards Hateley Heath, we happen across the Coach & Horses on Kesteven Road. Mr D9 remembers this being a Wetherspoons pub some years ago but today it'll do nicely as the place to peruse the Hub Marketing calendar. 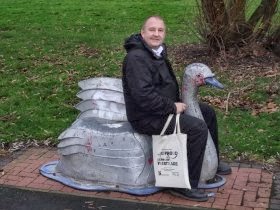 - Swanning About in Hateley Heath -
The open spaces opposite the Coach & Horses were once apparently occupied by maisonettes but nowadays the green gives the Chairman chance to come over all T Rex by riding a (not very) white swan. 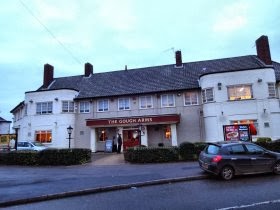 - The Gough Arms -
A short shuffle brings us next to the Gough Arms, a longstanding Hateley Heath landmark that I remember from previous rides on the old 428 and 429 bus routes. Here we maintain our uncanny recent knack of gatecrashing wakes - I think Mr D9 has a sixth sense for funeral business, trying to sniff out a bit of buffet. 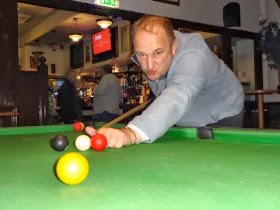 - The Chairman Goes All Potty -
After a swift visit to the Cottage Spring, sporting hostilities are resumed over the pool table at the Old Mill. The Chairman seems intent on wiping the floor with the Secretary and should have sewn up victory there and then given WME's consistent inability to pot straight. D9 takes the first frame easily but then commits the cardinal sin of potting the black out of sequence, handing frame 2 to a relieved Secretary by default. 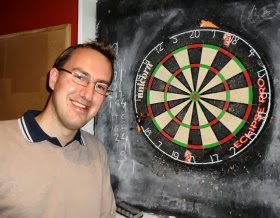 - And the 2013 Champion is... -
That tactical error came back to haunt D9 as the action moves to the Croft. The Secretary has got his eye in with the darts now and storms back into contention, meaning its all to play for in the deciding leg of the whole year. The situation took on such importance that only a genuine double could secure victory, and when Mr WME summoned up a barely believable double 8 finish the Chairman was sunk good and proper. 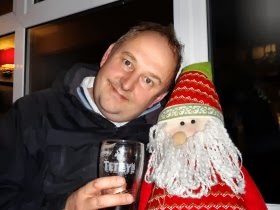 - The Chairman Gets His Claus Out -
With that, a final tour of Wednesbury gives 2013 a festive flourish. The Village, the Brunswick (minus Shameless), the Old Blue Ball and the Rose Hill Tavern are all sampled with various Santas spotted before the George ensures the year ends on a classic D9 dive experience. With that we wish you all a very merry Christmas and we look forward to starting it all over again in 2014!
Posted by West Midlands Exploration at 12:02 pm No comments:

D9 Does... Stafford and Uttoxeter

Friday 6th December 2013 and the countdown to Christmas means that some festive ferreting is very much in order as the Hub Marketing brigade descend upon Staffordshire... 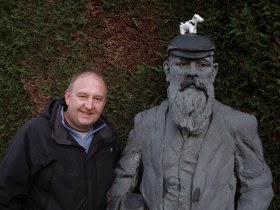 - A Grace-ful Pose -
Chilly mornings make early starts a challenge but all members are present and correct for the 76 out of Wolverhampton, trundling on through Coven and  Penkridge to reach Stafford for half past eight. The Chairman is immediately on alert for previous pavement pizza scars although the Sun's 'evidence' appears to have been painted over so we have to make do with meeting WG Grace over at Victoria Park. 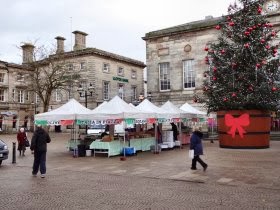 - Marketing the Bald Spot -
Stafford was very much entering the yuletide spirit with decorations along Greengate Street and a large tree taking pride of place in Market Square. The Italian stalls weren't the only things on display though as D9's bald spot crept into view when the Chairman was distracted by a rare pillar box. 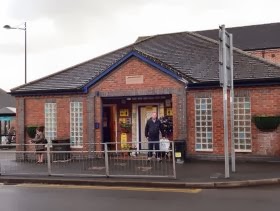 - The Uttoxeter Closet -
Our link to Uttoxeter is the 841 bus, a route that probably doesn't make a "big fat profit" but does take in some enjoyable village scenery through Tixall, Great Haywood and Little Haywood. We arrive in Uttoxeter just on quarter past ten whereby Mr D9 immediately makes a beeline straight for the toilet and finds to his surprise that the spotless gents is decorated with pot plants and ceramic duck ornaments. 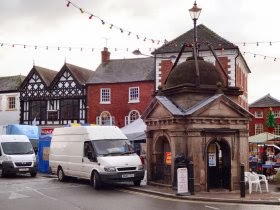 - Uttoxeter Market Place -
Uttoxeter is a market town in East Staffordshire that is notable for its racecourse, Stevenson's buses, Fox's biscuits and JCB construction equipment. We enjoy a classic ferret around the town's main streets before calling into Coffee & Cream (or was it Godley & Creme?) for a well-earned breakfast. 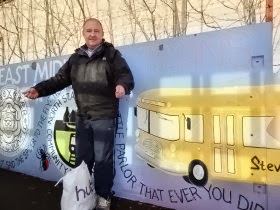 - A new style of D9 driving -
A gentle stroll down to the railway station was now in order, allowing us the opportunity for views across the neighbouring racecourse. The station itself is fairly basic and lacks a ticket office although there does seem to be a new footbridge plus an eye-catching mural that means D9 gets to drive for Stevensons. 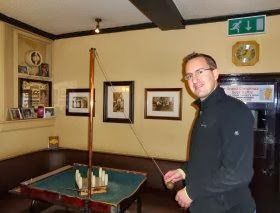 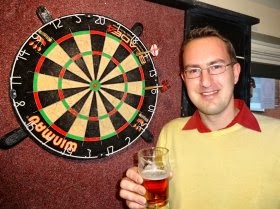 - Mine's a double! -
Having triumphed in the skittles skirmish, Mr WME then strikes gold in the darting duel thanks to a scarcely believable leg when he hit not one double but two to claim the crown. As such, the Secretary departed Uttoxeter with an unblemished combined 4-0 scoreline and thus thinks he might need to drink Bass more often. 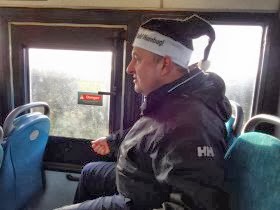 - D9 bashes the 841 -
From Bass to the bus and a return 841 that allows the Chairman to indulge in some D9 driving demonstrations, sporting a Christmas antidote hat in the process. Bramshall, Stowe-by-Chartley and Hixon are the other main villages covered by the service. 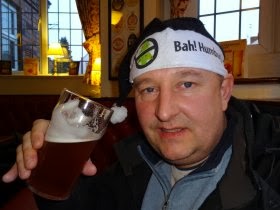 - The Great Haywood Grinch -
We alight at Great Haywood where the Fox & Hounds pub is closed and up for auction. The Clifford Arms is open though meaning the Bah Humbug hat gets a further airing accompanied by some Pendle Witches Brew from Moorhouse's of Burnley. 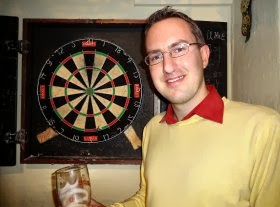 - Make that another double! -
We had a bit of time before the next bus to Stafford so we decided to sample Little Haywood too. Here the Red Lion sees darting hostilities resumed, and although the Chairman pulled a couple of legs back it was still Mr WME who was overall champion courtesy of a remarkable double 17 finish that even had the pub regulars gazing on in amazement. 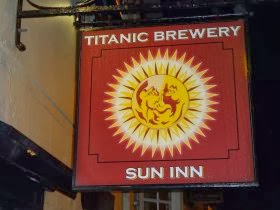 - A Titanic Tempter -
Back in Stafford there are plenty of inns and taverns to choose from, notably the Shrewsbury Arms (with a beermat ceiling and a room full of clocks), the Rose & Crown (Joule's), the Market Vaults (formerly Joxer Brady's) and the Lamb. My favourite as always is the Sun Inn, showcasing the range of Titanic ales in all their glory, and a delay to our train home means that we have to seek out the Railway in the backstreets for a swift closing half. Despite D9's humbug hat there was plenty of festive cheer throughout the day, and we look forward to more merry marketing heading towards the New Year.
Posted by West Midlands Exploration at 9:01 pm No comments: