The day begins on the 890 bus and a ride up to Worfield, a beguiling English village with several picture postcard type scenes to keep the camera occupied. I was already familiar with the Wheel Inn (not much sign of life sadly) and the garage on the main A454 road, but half a mile down a narrow lane is the village centre proper complete with memorial green, several old cottages, the parish church (St Peter's) and a cosy-looking pub (the Dog and Davenport).

From the church I climb the hill up to Hallon where I spot the local cricket club and linger a while waiting for the 114 route, operated by Arriva with an Optare Solo in Shropshire Council livery. The bus quickly delivers me to Bridgnorth town with a little jaunt down Hermitage Hill, giving me just enough time to reflect on how Worfield had made an excellent first impression and I'm already keen to return. 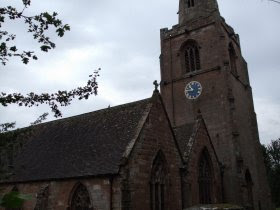 - Worfield Church -
To ale-related matters then, and after my customary bus and pub photos around High Town I make my way to the Severn Valley Railway Station, host venue to the 17th Bridgnorth Beer Festival. The station is always an atmospheric delight to visit but the presence of the CAMRA beer tent certainly added an extra notch or two to the expectation-o-meter. £8 covers the commemorative glass, programme and a clutch of beer tokens then it's time to get tasting the beer.

Flavoured ales seemed to be the order of the day where I was concerned so I launched straight into a third of Abbey Ales' Chocolate and Orange Stout - I'm sure Nickolenko would have approved of this choice and the orange came through very powerfully. Next was Sawbridgworth's Mead Mild followed by some Milestone Raspberry Wheatbeer and then came my favourite tipple, Titanic's Plum Porter with it's distinct fruity aroma and a taste that was faintly reminiscent of cough medicine but in a good way!

The festival visit was also punctuated by the presence of the steam trains and it was wonderful to sit on the platforms, glass in hand watching the train crew attending to their magnificent engines. I also squeezed in a peek inside the Railwayman's Arms, the station's on-site pub which boasts its own array of ales to match the proud collection of totem signs dotted around the walls. Feeling peckish I partake in a Reg May Pork Pie, just perfect with a dab of mustard, and then it's time for my final beer in the form of Three Tuns' Cleric's Cure. 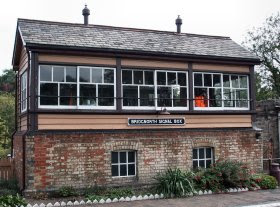 - Bridgnorth Signal Box -
Ales supped, the camera was getting a bit restless so I wandered down into Low Town to continue my photographic pub survey. The bus stop outside the Fosters Arms was then handy for my 13:54 114 connection, and another 'Shropshire Bus' Solo whisked me off on a tour of little villages featuring Ackleton, Badger, Beckbury, Ryton and Kemberton - an absolute treat.

I alight in Shifnal and set about documenting another Shropshire town, calling into the White Hart in the process for a crafty taster of Ernest George from the Welbeck Abbey Brewery in Nottingham, a nutty brown bitter that was deep on the palate (I almost sound as if I know what I'm talking about). The 892 completes proceedings with my return bus ride to Wolverhampton and another Shropshire spectacular is over; needless to say I thoroughly enjoyed the day, especially as the forecast heavy rain stayed away, and my compliments go to Bridgnorth CAMRA and the Severn Valley Railway for their efforts in putting on the festival.
Posted by West Midlands Exploration at 8:16 pm No comments: