Time ticks along and before you know it another month is almost done and dusted. March has gone about its business quietly and efficiently, stacking up a solid selection of updates for the West Midlands Exploration photostream - bring on those bullet points...

No doubt April will come and go just as quickly as March did, hopefully with some worthy further additions along the way. Until then, enjoy the photos...
Posted by West Midlands Exploration at 8:20 pm No comments:

Another look at Langley

There are certain places which seem to crop up in my archive time and time and time again, with the Langley area of Oldbury definitely being one example. Even though I've visited several times over the years, it's always worth going back to see what might have changed and whether any new photographic gems can be unearthed - yesterday's outing therefore kept me rather busy... 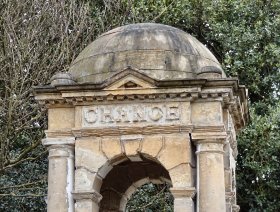 - Chance Water Fountain -
Friday 17th March 2017 and I have some Smethwick sidestreets to get me underway, Bartram Road leading up from St Paul's Post Office to Devonshire Road where I can spy Ruskin House as part of the Holly Lodge educational campus. Holly Lane soon has me bearing down on West Smethwick Park for which the Chance family (of the local Chance Brothers glassworks) were major benefactors. Two prominent features provide evidence of this Chance connection - a memorial to Sir James Chance (who originally purchased the land for the park) and a drinking fountain dedicated to John Homer Chance (a former Chance Brothers Chairman who died in 1900). 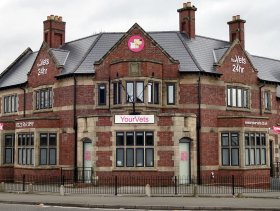 - The Queens Head gets 'vetted' -
A brace of former pub sites now require my attention. The Londonderry which stood on the corner of Basons Lane and Queens Road has been flattened to make way for housing, while the Queens Head (further along Queens Road at the junction with Londonderry Lane) is now a veterinary surgery although at least the building itself is still with us. A number of the local shops carry the pub's old name - Queens Head Fish Bar, Queens Head Hardware, Queens Head Balti, you get the idea - while the Wonder Wash launderette looks like the kind of timewarp place D9 would enjoy sampling. 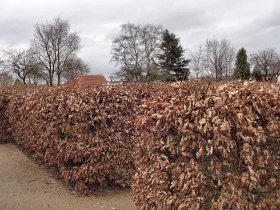 - Barnford Hill Maze -
Reservoir Road and Matty Road combine to lead me to the Q3 Langley Academy school, opposite which is the entrance into Barnford Hill Park. The early signs of spring are starting to peep through here, notably a crescent-shaped carpet of daffodils and a few brightly coloured crocuses. A youth shelter features a mural depicting picnic scenes (a dog trying to catch a frisbee) while a hedge maze allows for extra fun even if the foliage is decidedly brown. I then exit past allotments onto Farm Road to reacquaint myself with Langley Library, a lovely Carnegie landmark which originally opened in 1909. 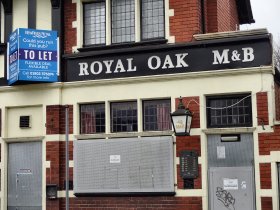 - Shutter sadness at the Royal Oak -
If Langley Library is still going strong after many years of sterling service, the same could not be said of the Royal Oak on nearby Langley Green Road. The pub looks rather sorry for itself with the dreaded sight of metal shutters telling tales of current closure; hopefully the situation isn't terminal as I am a fan of the building's traditional M&B detailing. Mill Lane is a derelict wasteland as I home in on New Inns Road Bridge for a brief taste of the Titford Canal. 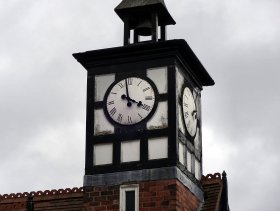 - Langley Park Lodge -
My momentary wander along the towpath is cut short by the prospect of Langley Park where the lodge is now home to the local Irish association. Langley High Street retains its heritage appeal thanks to some old-fashioned shopfronts while the Crosswells Inn, village clock and local primary school also add to the sense of history meeting the present day. Titford Road then has the task of taking me towards Causeway Green where the old Hen & Chickens pub is nowadays known as the Flavourz buffet restaurant. 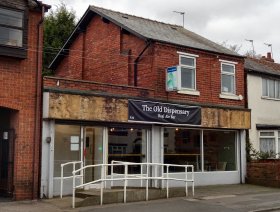 - The Old Dispensary -
As tempting as Flavourz might be, I'm keen to sample the hospitality on offer elsewhere with my prime target being a new micropub on Causeway Green Road just down from the post office. The Old Dispensary has set up base in what was until relatively recently a pharmacy store (hence the name). Real ales plus a cider or two are matched with classic pub snacks while the interior is modern but relaxing; I settle in for a pint of Aurora Big Dark, a satisfying porter from an Ilkeston-based brewery. 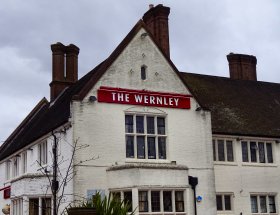 - The Wernley -
Bypassing Brandhall Golf Course, I investigate a section of the A4123 Wolverhampton Road for glimpses of Our Lady & St Hubert's Roman Catholic Church. The next junction along is home to the Wernley, a large Sizzling establishment with a bowling green out the back. Built in 1933/34 for Mitchells & Butlers, the pub has achieved listed status as an inter-war roadhouse example of the reformed public house movement. 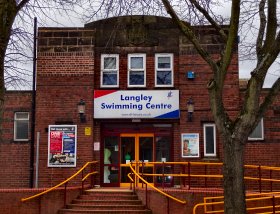 - Langley Swimming Centre -
A Warley wiggle involving Clent Road, Pottery Road and George Road allows for further pub pictures (accounting for both the George and the Plough, the latter by Bristnall Fields shops). Langley summons up a couple more targets by way of a parting gift so the swimming baths and the Merrivale (minus D9's favourite closet) also get the WME treatment, then Tat Bank Road transports me through to Oldbury for my train connection home. My latest Langley adventure will therefore go down as one of my favourites, and I expect it won't be too long before I find myself back that way yet again.
Posted by West Midlands Exploration at 5:34 pm No comments:

Moving into March then and the month has gotten underway with two noteworthy trips, one in Birmingham and one in Walsall. The Birmingham bash was an eventful Hub Marketing affair, riding around on the Outer Circle bus route while escaping from some particularly miserable weather, whereas the Walsall visit involved sampling the town's salvaged beer festival... 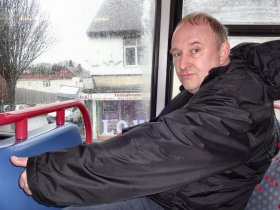 - D9 drives the 11C -
Starting with Friday 3rd March and the Outer Circle extravaganza saw Mr D9 and I completing a full circuit of the famous bus route. There was plenty of scope for the Chairman to demonstrate his driving prowess before the morning included a classic greasy spoon breakfast courtesy of Stan's in Handsworth - Pepsi signs, fried bread and black pudding, what more could anyone ask for? 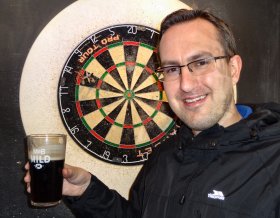 - WME triumphs 10-2 in the darts duel -
The customary hub darts contest took place over two venues: WME Whirlwind secured a sizeable 6-2 lead in Stockland Green (where the former Stockland pub is now trading again as the Village Green Flaming Grill) which he followed with four unanswered legs at the North Star in Stechford (D9 was probably too busy drooling over the flat roof architecture). The heavy rain didn't stop us from attempting the occasional photo, notably collecting shots of Stechford's supposed village green accompanied by Station Road shops. 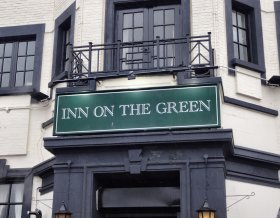 - Inn on the Green, Acocks Green -
Talking of greens, Acocks Green provided the thrust of our afternoon investigations where pub possibilities included the Great Western, the Auld Triangle (rechristened from the Red Lion) and the Inn on the Green. The last of those was Birmingham CAMRA branch's Pub of the Year winner in both 2015 and 2016, a real ale pedigree that prompted us to try out the Bitter Brummie and A Stout With No Name. Cracking beer and a real Brum landmark, the pub looks out over the busy Warwick Road roundabout at the heart of the village. 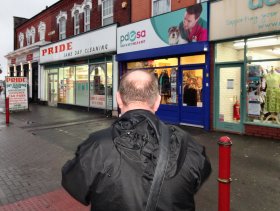 - The Bald Spot taking 'Pride' of place -
Completing the 11C loop involved some evening endeavours in Cotteridge and Selly Oak. Cotteridge Social Club was a real find complete with chintzy furniture and serious scratchings, then the Chairman reminisced about local character the Cotteridge Growler who died recently. The bald spot clocked in outside Cotteridge Shops and there was a dusky photocall at the former Selly Oak bus depot as we recalled memorable drivers of the past. The whole day was rounded off with some curry goat in Handsworth where Mr D9 enthusiastically made the most of some Cross Guns hospitality. 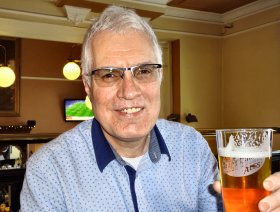 - BFG in the Black Country Arms -
And so to Walsall where the town's annual beer festival was initially scheduled to be held at the MPV on Intown Row/Whittimere Street. A licensing issue however meant the event could not proceed there but all was not lost - a scaled-down festival was set up at the Black Country Arms instead so that's where Dad, Nick and I were headed on Saturday 11th March. For a salvage situation this was an impressive effort and among the beers we savoured were BFG, Plum Mild, Chocolate Slug Porter, Shakespeare Bard's Best and Salopian Freeze Frame. Talk of Austrian holidays and Engelbert Humperdinck kept us very much entertained although Nick nearly upset the natives by confessing his dislike for rugby! 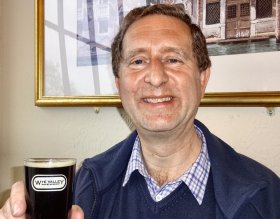 - Something dark in the Wheatsheaf -
Besides the Black Country Arms, some other Walsall pubs also stepped into the breach by hosting ales originally intended for the MPV. Our itinerary thus took us to the Wheatsheaf and the Victoria (Katz) which between them supplied us with Sarah Hughes Dark Ruby, Holdens XB and Church End Gravediggers Mild plus more rugby. A discussion about driverless cars and the welfare state concluded some wide-ranging conversation and we thoroughly enjoyed our afternoon. Thanks are therefore due to Walsall CAMRA for their sterling efforts in difficult circumstances - cheers!
Posted by West Midlands Exploration at 11:56 am 2 comments: