A Century for Sandwell

Having spent the last few days roving around the rail network, I thought I'd better get back to the day job by updating WME - and what better way to return to update action than with a milestone to celebrate: WME Sandwell passing the 100 photos barrier.

To be honest, the landmark had rather crept up unnoticed, but is another indication that my galleries are generally becoming more substantial. The update itself sees the arrival of a Smethwick Rolfe Street Station collection, currently containing two similar platform views taken exactly two years apart. There's a welcome addition to the Midland Metro collection, with a tram at Trinity Way finally breaking the Hawthorns' previous total domination of the collection. Talking of new locations, Bearwood Bus Station now features on Sandwell by Bus thanks to a photo of the 447. As updates go, this one was fairly constructive anyway, but the 100 up news just makes it even better.

Not that WME Sandwell is the only gallery receiving some action. WME Wolverhampton is still ticking over, with a photo of Tettenhall Old Bridge joining the Staffs & Worcs Canal, whilst there's also a view of some local shops thats been added to Exploring East Park. Whilst we're talking of milestones, its worth noting that WME Wolves is closing in on the big 200, just another 8 photos to go...

Turning finally to Exploration Extra, and some good news to report here too. I've added two new collections, both featuring some of my latest photos. London: March 2007 features a couple of bus photos taken at Victoria Bus Station during my outing with Rog and Woody earlier this month, and I've got the Rail Rover 2007 collection off and running with bus photos at Hinckley and Nantwich. I couldn't resist putting these photos online, although it may be some time before there are any follow-up photos joining these collections. Still, its just great to get some new stuff out there, as I'm usually dealing with photos that are over a year old!

So that's that, a busy week of exploring followed by a useful update. I've still got loads to do on the galleries, there's plenty of photos to shift around and hopefully a few more will appear out of the archive before too long. So keep checking in on WME, you never know what might be appearing next...
Posted by Paulwulf at 10:06 am No comments: 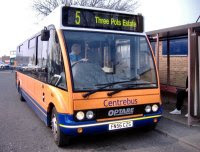 Every year, somewhere around March time, I look to have a week off work and spend a few days exploring the wider Midlands rail network using a Heart of England Rail Rover. 2007 was no exception - here's what happened...

On reflection, I think the week has been a resounding success - I've visited some great places, explored some intriguing stations, enjoyed the Spring sunshine and come away with over 400 photos, not bad for a few days work. Whats more, there's still so much I haven't done and so many places still left to visit. I wonder what Rail Rover Week 2008 might have in store?

With Rail Rover Week 2007 coming up, I wasn't keen on doing a big exploration last Friday. Instead I decided on a little ride out to Pattingham and back, giving me a chance to investigate the 517 route and get a few photos of one of my favourite Staffordshire villages.

The 517 is a good little route, only taking about half an hour all told and this includes obstacles such as The Holloway in Compton, not to mention speedbumps going round The Parkway in Perton. The terminus is outside the local shops and the bus then turns around by the church before heading back to Wolverhampton. Unfortunately I didn't get a bus photo, but at least this gives me an excuse for a return visit.

Pattingham village is also worth a look. There isn't much there, but enough to keep me occupied for an hour or so. There's a block of shops including a hardware store and a Stars newsagents, whilst St Chad's Church is part of the South Staffs Historic Church trail. The Pigot Arms is situated opposite the church and is part of the Amber chain, whilst the Crown is a more basic looking local hidden away further down the High Street. With a look at the local park and community noticeboards, plus time for a quick snack, I managed to get a good set of photos that hopefully provide a snapshot of a day in the life of the village. Above all, I really enjoyed my visit, setting me up nicely for some big adventures to come...
Posted by Paulwulf at 8:48 pm No comments:

50 up for WME Solihull

Hmmm, I seem to have been a bit quiet on the old blog recently, despite keeping the updates flowing on the galleries themselves. I haven't done too badly recently, with some substantial updates to the Rog Files 2006 and a few useful local gallery additions - there's even been some new stuff on Exploration Extra would you believe!

Anyway, back to today's news and I couldn't let this pass by without a mention - WME Solihull has indeed broken through the 50 photo barrier. The gallery has rather ticked along unnoticed since its launch as a breakaway from WME Birmingham, but just lately there has been a bit of development, especially as regards the local photos in the Exploring Damsonwood and Exploring Kingshurst collections.

Today's update returns to the usual transport-related suspects though, with a train photo each for Solihull and Shirley Stations, plus another view of the Shirley Station bus stop on Stops & Stations. Solihull by Bus receives shots of the 151 and another 37, making 5 photos in all and a gallery total of 52. Solid if unspectacular progress then, but thats just the way I like it - bring on the next 50...
Posted by Paulwulf at 3:30 pm No comments: