WME tradition in recent times has held that Redditch had the honour of ushering in another year of beer festival attendance. Sadly the Worcestershire event has been postponed thus far in 2014 while the local CAMRA branch explore options for venues with greater capacity, meaning that the curtain-raising baton was up for grabs and Derby swooped in to seize the opening spot for itself. 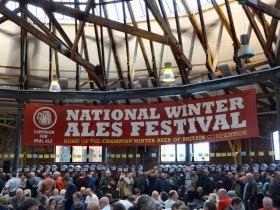 - Roundhouse Revelry -
Friday 21st February thereby saw Nick and myself bound for the East Midlands eager to savour what was now the National Winter Ales Festival, Derby having taken on the national mantle from Manchester. The venue was still the glorious Roundhouse with over 300 ales (including many stouts and porters) crammed into the turntable and carriage rooms. Our sampling got off to an excellent start with Hammerpot's Oyster Pond Stout, which definitely lived up to its billing of having a 'long duration'. 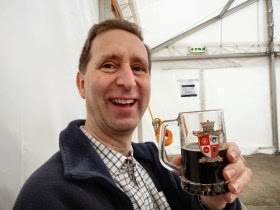 - Old Freddy Walker -
We took up residence in the entertainment marquee where Nick got most excited about the idea of the Leatherbritches Brewery (thankfully his own trousers were restrained by comparison). Working our way through the programme, we tasted tantalising thirds of Smokehouse Porter (evocative of Cromer smokeries), Rabbie's Porter (essence of gingerbread, chocolate and currants), Green Jack Ripper Trippel (a hefty barley wine) and Rum and Raisin (said to be redolent with eponymous overtones). However, the ale that truly won us over was the liquid Christmas pudding that is Old Freddy Walker - one sip of this will ensure you have your eyeballs out on stalks and a big grin on your face. 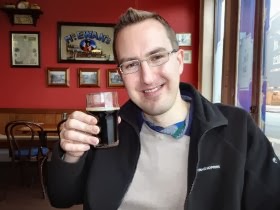 - The Litter Chester Ale House -
As the roundhouse became increasingly crowded, we took our leave to see what treats Derby had to offer us pub-wise this year. The free bus into the City Centre was again very much appreciated, then a stroll along Mansfield Road brought us to Chester Green, home to the Little Chester Ale house. This establishment is Derby's first micropub and its compact size makes it feel really intimate, while the Wentwell Brewery adds even further to the appeal - cue for some Justice for Gingers. A cracking little discovery! 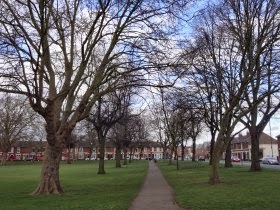 - Chester Green -
I rather liked Chester Green as an area actually, especially the open patch of green with its avenue of trees just across from the parish church. As well as the Little Chester Ale House we also located the Coach and Horses where the barmaid scribbles down our CAMRA membership numbers and serves us up a rugby-related Belhaven brew. 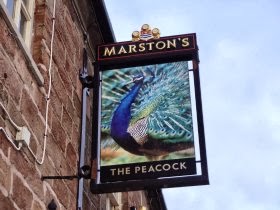 - The Peacock -
A jink down to the Old Nottingham Road reveals the Peacock, nominally a Marston's house but offering a wide range of beers including the Peacock Pale Ale. The rear snug is a relaxing spot to peruse the Good Beer Guide and read up on Derby's many ale attractions. 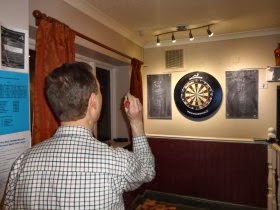 - Games in the Golden Eagle -
The backdrop to our afternoon adventures is the speed skating at the Winter Olympics, where I felt our British skater was harshly treated when disqualified in her semi-final. The Seven Stars and the Five Lamps are both noted out towards Duffield Road, then we receive the warmest of welcomes at the Golden Eagle on Agard Street, spoiling ourselves with gourmet scotch eggs and a game of darts. 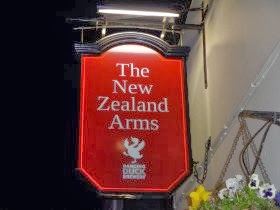 - New Zealand Arms -
Two brewery taps feature during the tail-end of our itinerary. The New Zealand Arms is Dancing Duck's contribution, the backstreet location adding to the sense of unearthing a hidden gem, while Mr Grundy's Tavern is housed as part of an impressive Georgian Hotel - the bar here matches the beer in terms of having a First World War theme. The Greyhound roof terrace is a Dashingly Dark place to have one for the road, and even a lengthy detour on the train ride home could not detract from a brilliant day. Cheers!
Posted by West Midlands Exploration at 7:15 pm No comments:

February's episode from the Hub Marketing Board sees Chairman D9 donning the fancy dress again during a Wolverhampton wander around Bushbury, Northwood Park, Pendeford and Claregate... 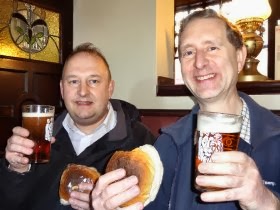 - Cobs at the ready! -
The afternoon begins with a very seminal moment indeed, for its the first ever meeting of our illustrious Chairman and the equally regal Nickolenko esquire. The Posada is the setting for an opening pint plus cobs all round, with poor old D9 having to stump up for the cheese and onion after incurring a lateness penalty. 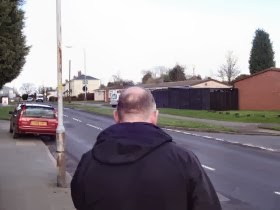 - A pre-fabricated bald spot -
We bid farewell to Nickolenko and wend our merry way to Bushbury, pausing at the Woodbine pub as situated next to the Three Tuns Lane railway bridge. Wood Lane and Lincoln Green then have some interesting surviving examples of pre-fabs, housing built originally as a temporary measure just after the Second World War. 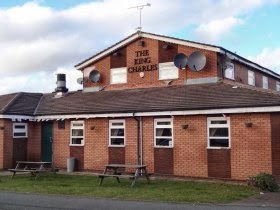 - The King Charles, Cavalier Circus -
The Northwood Park estate was once home to both the Wentworth (now a care home) and the Staffordshire Volunteer (now a supermarket) but at least the King Charles is still trading. Here we resume battle over the dartboard, the Secretary using his home advantage to cruise into a 3-0 lead. 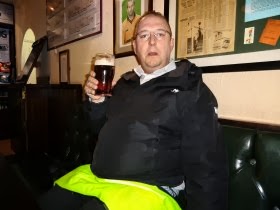 - No Fail in the Moreton -
To Fordhouses next, and our arrival at our old friend the Moreton prompts a bespectacled Chairman to find a new use for his trusty hi-vis jacket while Steve Bull gazes down upon a certain bald spot. A stroll towards Patshull Avenue then gives us chance to catch up on the latest roadworks at Vine Island where the Wobaston Road is being widened into a dual carriageway to better serve i54 access needs. 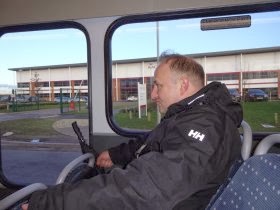 - D9 drives the i54 -
The 6A route offers the chance for a closer look at the growing i54 site, with Mr D9 relishing the chance to demonstrate his driving as we crunch the gears down by Moog. Recent service changes mean that the 25A and 25C circulars have been newly created to provide additional connections for i54 workers, and a quick stop at the Pendeford Business Park ensures that our 6A has a full loading to contend with. 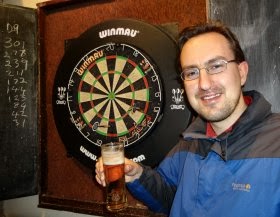 - More Darts Domination -
We alight at Whitburn Close where a quick dash across Morrison's car park brings us to the Pendulum, a Mitchells & Butlers pub built to serve the Pendeford estate as it grew up on the site of a former airfield. The flight heritage served as appropriate inspiration for the Secretary to chalk up another darts leg thanks to a decisive double ten checkout. 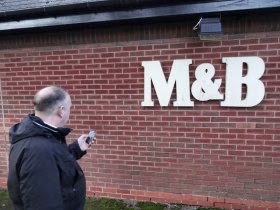 - A Pendulum Pose -
The D9 bald spot was very much on display as we admired the Pendulum's curious architecture with its various pointy features. We then hop back aboard the 6A so that the Chairman can get all nostalgic about the traffic calming measures employed out on the Dovecotes. He was less excited about the Pilot at Blakeley Green, but that probably had something to do with the devious discount pocketed by WME. 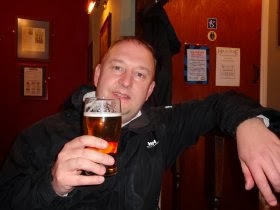 - Hail to the Ale -
Claregate beckons and a special mention for the Hail to the Ale micropub on the corner of Pendeford Avenue and Blackburn Avenue. Converted from a former shop, the business serves as the tap for the Morton Brewery - since opening last autumn the place has already established a deserved reputation for high quality ale. We were only too happy to sample some beer for ourselves, before swiftly rounding off the evening with darting duels at the Claregate and the Swan - Cheers!
Posted by West Midlands Exploration at 4:14 pm No comments:

Greetings photo pickers and welcome to the WME chart rundown where we see what new entries and climbers have come our way courtesy of January's spin on the turntable...

Straight in at the bottom of the listing is WME Worcestershire, opening its hit account for 2014 with a Barnt Green double a-side (the Barnt Green Inn and the local cricket club) plus a bus stop single from Areley Kings. WME Staffordshire meanwhile has been on a diet of b-sides from Boney Hay (the 394 bus then the Foresters pub) and Brereton (the limited architectural appeal of the Castle).

B-sides are very much to the fore on WME Walsall too, where the fabulous flips comprise Bridle Lane at Barr Beacon and the Anchor Inn at Brownhills - there are also tracks of the railway variety with a platform view from Bloxwich Station. Elsewhere, January's highest climber is regular chart visitor WME Birmingham which notches a mere seven new entries including the likes of Camp Hill Locks, the Boldmere Oak and the Blake Barn.

Perched just outside the top 20 is WME Solihull with a rare chart appearance in the form of the 166 bus at Solihull Station - it might only be a solitary addition but it merits a fair bit of airplay. Exploration Extra is doing its best to land a new record deal by showcasing a repertoire that now includes Skegness Library, Crewe Bus Station and Weymouth Harbour, an eclectic album if ever there was one.

We're well into the top ten now and the headline news here is that we actually have a couple of genuine WME Dudley re-entries. The 267B route at Stourbridge first made the charts back in the Fotopic days but it goes to show that old favourites can still return to the fold occasionally. A novelty act can always score highly at this time of year but its a real chart heavyweight that is the undisputed Top of the Pops this time around - yes, WME Wolverhampton has stormed to #1 with a medley of canals (an Autherley Junction milepost), buses (the old 513 route at Warstones), parks (Bantock's wonderful ornamental garden) and pubs (the Bruford Arms and the Springhill). The 2014 photo charts are already making their mark, and with February primed ready to contribute further new releases it might be worth listening out for whatever else might soon be coming your way...
Posted by West Midlands Exploration at 9:31 pm No comments: