Saturday 7th September 2019 sees me joining the Beardsmores for another coach trip, this one being a Welsh wonder that takes us up into Snowdonia and over onto the Isle of Anglesey... 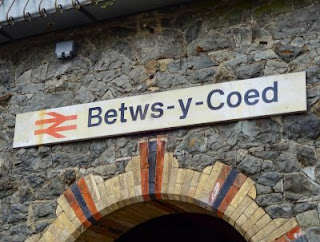 - Betws-y-Coed Station -
The coach departs Heath Town Holy Trinity at 8:30am sharp and our initial destination is the village of Betws-y-Coed in the Snowdonia National Park. Getting there involves an intrepid journey along the A5 trunk road past Shrewsbury and Oswestry then on through the picturesque towns of Llangollen and Corwen; some of the scenery once across the Welsh border is quite spectacular, whereby I'm particularly intrigued to catch sight of the famous Pontcysyllte Aqueduct. A 'Dreamboats and Petticoats' soundtrack also adds to the entertainment before we set down outside Betws-y-Coed railway station just before 11 o'clock. 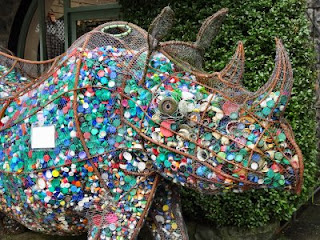 - Edith the bottletop rhinoceros -
Betws-y-Coed is a principal stop on the branch between Llandudno Junction and Blaenau Ffestiniog, a line Stephen and I memorably explored last year during our Colwyn Bay cricket getaway. The platform is presided over by Edith, a rhinoceros figure gradually being filled up with discarded bottletops, and Dr Sen the orangutan sculpture as fashioned out of beach litter. There's a small railway museum on the old goods yard with its own miniature steam train service - an unexpected whistle certainly makes me jump! 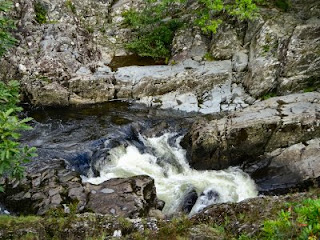 - River Rapids -
Betws-y-Coed has become a popular centre for outdoor activities and styles itself as the 'Gateway to Snowdonia'. Notable landmarks include a handful of coaching inns (such as Glan Aber and the Royal Oak Hotel), a village green that contains a football pitch, and St Mary's Parish Church (preparing for Sunday's male voice choir concert). Arguably the most enchanting feature of all is Pont Y Pair Bridge, spanning the River Llugwy courtesy of five stone arches - the name means 'Bridge of the Cauldron' which is not surprising when you see the surging waters below. 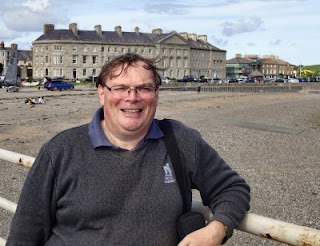 - Mr B on Beaumaris Pier -
There's a minor drama when Mr Beardsmore Senior momentarily boards the wrong coach but he is quickly retrieved much to Stephen's relief. The mountain views en route towards Anglesey make for a truly dramatic spectacle as we pass Swallow Falls and negotiate the twisty lanes through Capel Curig and Bethesda. Robert Stephenson's Britannia Bridge crosses the Menai Strait in carrying us onto Wales's largest island where more narrow roads precede our afternoon arrival in Beaumaris. The town has an attractive promenade and a small pier where crab-catching seems to be a favourite kiddies pastime. 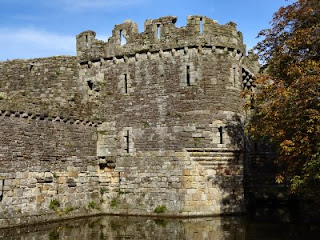 - Beaumaris Castle Gatehouse -
Lunch is our immediate priority so we focus in on Church Street and choose between contrasting pub options. The Bold Arms gets our vote as a welcoming Marston's establishment with a penchant for rugby league shirts whereas the George & Dragon directly opposite is a more pricey Robinson's place. Our menu musings result in all day breakfasts and a gammon for Stephen (with crinkle cut chips), not bad at all. We then seek out Beaumaris Gaol - or Carchar to use the Welsh terminology - wondering if they might accept Mr B Senior as their latest inmate. John is spared because it turns out the former prison is now preserved as a museum; it was originally constructed in 1829 but is a mere youngster compared to the 13th century provenance of Beaumaris Castle in all its moated magnificence. 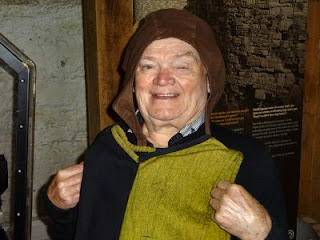 - A Peasantry Pose? -
Beaumaris Castle was commissioned under the reign of Edward I but never actually reached a stage of full completion. We survey the inner ward where Mr B Senior grapples with some giant chess pieces before undertaking dressing-up duty in one of the towers - we think the peasant look rather suits him! There are various passageways and corridors as we try to find a staircase up onto the battlements. Eventually we clamber the right way and are rewarded with a breathtaking vista, the ruins illuminated in the sunshine with the sparkling sea for a backdrop. 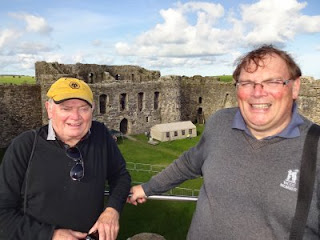 - Cheers to a monumental day out! -
The coach is due to pick us up at ten to five so we decamp to the Olde Bull's Head for a closing half (Timothy Taylor's Landlord for me, a good barometer beer that's up to standard in this instance). Charles Dickens and Dr Johnson are both said to have stayed here so we're in illustrious company it seems. Making sure John doesn't go astray again, we catch the coach without incident and the homeward journey makes use of the A55, M56 and M6 which naturally isn't quite as scenic as earlier. What a day in Wales that was!
Posted by West Midlands Exploration at 9:15 pm