While the 11A and 11C 'Outer Circle' in Birmingham can stake a claim to be one of Europe's best known bus routes, its sister service the 8A and 8C 'Inner Circle' tends to go largely unheralded. Step forward the Hub Marketing Board who are eager to examine what this inner city circuit might have to offer... 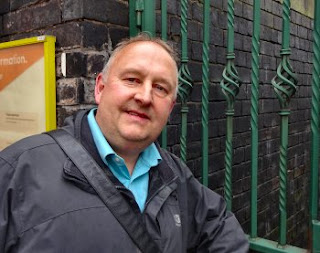 - The Jewellery Quarter Closet -
Friday 17th May is our chance for a half day homage to the number 8 so members congregate at the Jewellery Quarter for a 1pm start. The cast iron urinal outside the railway station is ideally placed for an opening photocall before we catch the 8C to Newtown via Hockley Circus and Gerrard Street. The first pub of the day is our old favourite the Bartons Arms where the tiling is as spectacular as ever. A pint each of Oakham JHB will be easily the best beer we'll drink all day, and the setting is stunning complete with snob screens and hunting friezes - make no mistake, the Bartons is an all-time classic. 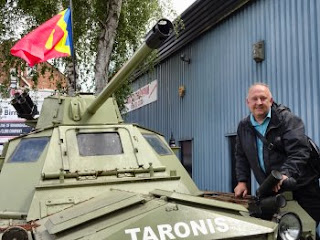 - Getting tanked up in Aston -
Park Lane leads us into Aston where the Chairman gets reminiscing about two bygone businesses; both Ansells Brewery and the old HP Sauce factory were based at Aston Cross, the former having ceased production in the early 1980s whereas the latter closed in 2007. We need a silly song to lift the mood - cue Stanley Hollway's 'Galloping Major' - while D9 can't resist clambering aboard your common or garden roadside tank for one of his most unusual driving poses. A swift Guinness in Shanahan's gives us an early slice of Irish atmosphere, the pub actually doubling up as a greasy spoon cafe which serves the local salvage yards. 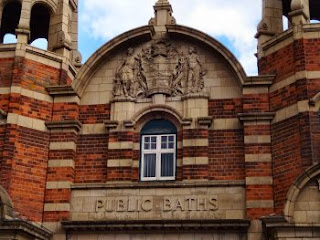 - Nechells Public Baths -
The joy of the Inner Circle is that we get to go deep into some truly fascinating Heartlands territory. Nechells isn't directly on the bus route but we can't resist branching off for a look at the Villa Tavern, a building that dates from 1925 and retains many original features. The function room here is primed for some darting action as WME Whirlwind reasserts his authority thanks to a 3-1 triumph powered by M&B Mild. The back bar adds an extra veneer of character and there's more heritage over the road courtesy of Nechells Baths, which like the pub is Grade II listed. The baths opened in 1910 with separate male and female entrances, and having been saved from demolition it is now a community well-being facility. 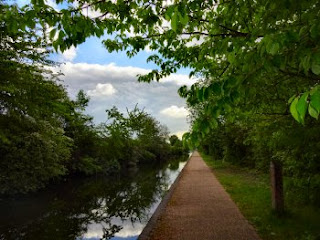 - Grand Union Canal near Aston Church Road -
Time now for a canal interlude perhaps? We want to make our way through Saltley so we join the Grand Union and bear south beside the River Rea and the A47 Heartlands Parkway trunk road. I wouldn't describe the towpath as scenic given the presence of some dreary recycling plants but we entertain ourselves by reliving the sounds of Eurovision 1979 - the UK entry was by Black Lace that year, finishing 7th with 'Mary Ann' whereas Israel won with 'Hallelujah'. We then emerge at Adderley Park where the eponymous local watering hole seems to be preparing for a party and the barstaff are arguing about some lost keys. 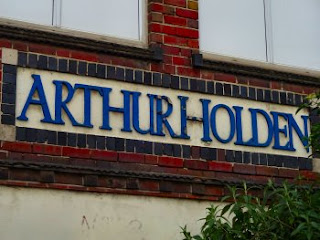 - An Arthur Holden's Factory Find -
Adderley Park feels very bleak as a railway location these days with the Station Hotel looking almost abandoned directly opposite the ticket office. Ash Road is closed for gas main repairs so the Inner Circle currently has a slight diversion en route to Bordesley Green - we survey the frontage of the ex-Arthur Holden & Sons factory (the firm specialised in paints, varnishes and lacquers) before undertaking a detour of our own, enticed along Ronald Road by the decaying remains of the Tipsy Gent. That establishment must have been shut for some considerable time but Shannon's is still going strong in giving us a second Irish-influenced item on our burgeoning itinerary. 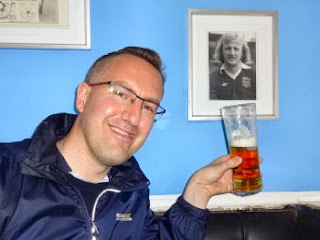 - A different take on Burns Night? -
We're running out of time to complete the entire 8A/8C loop today so we bail out at Bordesley and save the other half of the route for a future trip. This does however mean we can sample some hardcore Bluenose boozers in the vicinity of St Andrews football ground. The Cricketers Arms on Little Green Lane sets things rolling on this score with a very warm welcome while the Roost is more functional yet still worth a swift half. Tilton Road corner is then where we find the Royal George which boasts a gallery of Birmingham City heroes from yesteryear; alas the Secretary couldn't find a framed portrait of Britain Beermat so he has to make do with a youthful Kenny Burns instead. 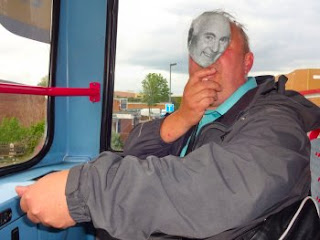 - D9 drives to Deritend (with help from a friend) -
That my friends is very nearly that as we board the 97 on Garrison Lane bound for Birmingham City Centre. The Chairman takes the opportunity to stage a more conventional driving pose (with some assistance from a Coventry Road legend) and our Guinness nightcap comes at the Irish Centre in Deritend where the Connaught Bar was readying itself for the Friday night craic. The evening ends with a Midland Metro ride home and we're already looking forward to completing the whole Inner Circle circuit in due course. 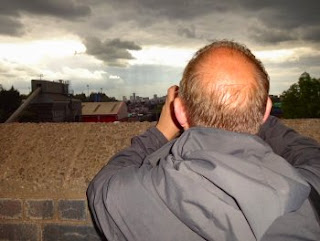 - And finally... a stormy spot -
No set of Hub Marketing minutes can be signed off unless a certain bald spot has made an appearance, so here by order of the Secretary is an example surreptitiously taken amidst the gathering clouds near Adderley Park station. Until next time, cheers!
Posted by West Midlands Exploration at 7:12 pm