Before I get stuck into whatever 2021 has to offer outings-wise, it's only right and proper that I give December 2020's final couple of adventures the attention they deserve. Both trips involved Black Country canals and chilly temperatures... 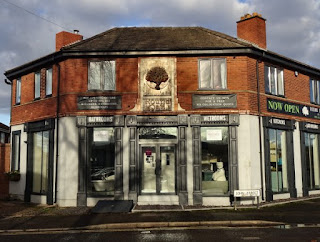 - Round Oak Interiors -
This two-pronged tale begins on Christmas Eve with a dose of the Dudley No. 1 Canal, although I started out by getting pictures around Bromley and Brockmoor first. Perished pubs were chief among my thoughts at this stage, most notably the Commercial (derelict for many years but still with some Hanson's signage intact), the Brockmoor House (also rotting away after being seemingly abandoned) and the Royal Exchange (a Bankwell Street Banks's that became 'Chimera' specialising in Japanese card games). Another prominent bygone boozer has to be the Round Oak on the junction of John Street and Dudley Road - it stood empty for ages but has been resurrected as an interior design showroom. 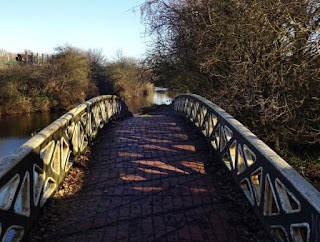 - Woodside Junction -
Joining the Dudley No. 1 Canal at Level Street, I made swift progress through The Waterfront (largely deserted except for some folk at the moorings) and on into the wider Round Oak regeneration zone. There are still hints of industry here, particularly as regards the Tata Steel Terminal which continues to be a significant rail freight operation. Woodside Bridge preceded my arrival at Woodside Junction from whence the Two Lock(s) Line historically connected with the Dudley No. 2 Canal at Blackbrook Junction. Unfortunately this shortcut was plagued by subsidence issues, effectively closing in 1909 and latterly built over with the Narrowboat Way/Navigation Drive business park. 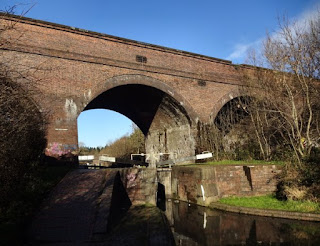 - Parkhead Viaduct -
Peartree Lane Bridge and near-namesake Peartree Roving Bridge kept me occupied through to Blowers Green where a pumphouse marks the meeting point with the Dudley No. 2 Canal. The stately span of Parkhead Viaduct looked majestic in the sunshine - this Victorian example of railway engineering dates from 1880 having replaced an earlier wooden structure - and there were a trio of locks to contend with before I found the southern portal of Dudley Tunnel. My walk concluded with sightings of the disused Claughton Centre (a former schoolhouse on Blowers Green Road) and a dart through Dudley town centre prior to the number 1 bus home. 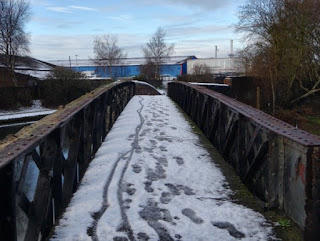 - Pudding Green Junction -
We'll now hop forward a few days to Wednesday 30th December when my post-Christmas treat was a slippery stroll along the Ryders Green end of the Walsall Canal. The icy residue of recent snowfall was refusing to melt away as I pick up the story at Oldbury, taking the Birmingham New Main Line from Bromford Lane to Pudding Green Junction. It's treacherous underfoot as I join the Wednesbury Old Canal, Izons Bridge having an immediate industrial flavour with the J B & S Lees Trident Steelworks close at hand. Operations at the Albion Road site began as a family business in 1872, going on to specialise in rolled strip steel although  these days the brand is owned by the Liberty Group. 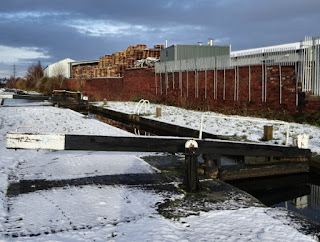 - Lock 2, Ryders Green -
Having slushed my way over Izons Turnover Bridge and then beyond the very grey Belper Bridge, I made it precariously to Ryders Green Junction. Here the Wednesbury Old Canal veers off towards Swan Lane whereas the Walsall Canal commences its route to Birchills; the junction is watched over by the Robinson Brothers Chemical Works which may explain the distinct whiff of something vinegary. A daring descent of Ryders Green Locks was next for my consideration although I did pause to account for the Eight Locks pub, potentially closed for good as at least part of the building is now a beauty parlour. 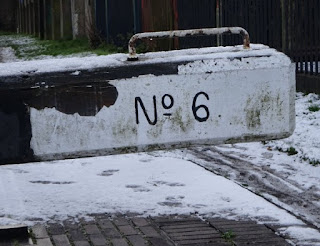 - Lock 6, Ryders Green -
As the pub name indicates, there are eight locks in total on this particular flight with the sequence stretching from Ryders Green Road down to Great Bridge. Greets Green Parish Church and a pallet factory added their presence to the snowy scene whilst I contentedly surveyed through to Lock 7, exiting the towpath at Great Bridge Street in case the ice started to get the better of me. The scattering of white certainly gave the locks an extra photogenic edge compared to their usual relative bleakness, and I finished off passing the George Salter Academy to catch a tram back from Dudley Street (Guns Village). Cheers, brrrr....
Posted by West Midlands Exploration at 9:35 am